Homeostasis (Latin: homeo-, "similar to"; stasis, "a standing still")[1] is a steady state (a system that does not stray away from a range of favorable conditions, maintaining a relative constancy) in which processes exert positive and negative control over the variables in a system. In other words, it is a system that remains in a certain range of stability, with certain factors affecting it while also responding to the changes in order for the system to remain more or less the same. A prominent example of such would be our body temperature: for the most part, humans maintain a fairly constant temperature of 37° C (98.6° C for the Americans). If it is cold outside, the body generates heat in order to preserve that temperature internally; if it is a hot day outside, sweat is produced which later evaporates and thus cools the body.[2] In biology, there are four categories of homeostatic control.

These processes regulate and maintain the internal environment of a cell or an organism. Each process involves:

Examples of physiological homeostasis include the control of blood sugar levels, heart rate, and body temperature. 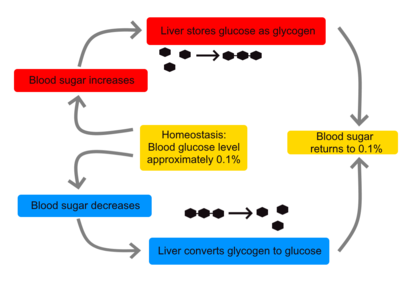 Illustration of homeostasis in regards to blood sugar levels.

These are the processes that control disturbances in developmental conditions, ensuring that the fitness of the organism is not impaired.

This describes the tendency for species to resist the effects of artificial selection, in order to maintain genetic composition.

There are some ecological processes that are considered homeostatic, such as the regulation of population density and diversity.

This biology-related article is a stub.
You can help RationalWiki by expanding it.
Retrieved from "https://rationalwiki.org/w/index.php?title=Homeostasis&oldid=2194854"
Categories:
Hidden category: