From RationalWiki
(Redirected from Physiology)
Jump to navigation Jump to search 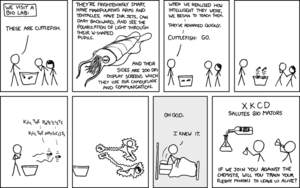 Always keep the Biologists happy: or else *gun cocks* 🔫

Biology (Greek: βίος, bios, life; and -λογία, logia, study of) is the branch of science that studies life, including the origin, distribution, structure, organization, evolution, ecology and function of living organisms, as well as their classification. Biology evolved out of other natural sciences and medicine as a discipline of its own in the mid- to late-19th century. Along with chemistry and physics it is now one of the three sciences that are commonly taught in schools.

Biology is the study of life in general. Its domain includes the nature and origin of processes structures found in living things and how they respond to various stimuli. Parts of biology are based on chemistry. The knowledge of how enzymes and cells work is essential for the production of effective drugs. Biologists also study pathogens, or disease-causing agents such as certain bacteria and viruses. Indeed, modern medicine cannot exist without biology.

Darwin's theory of natural selection underpins modern biology. Genetics and the study of DNA fall under biology as well as the tracking of evolutionary changes in species. Evolution is an important underlying principle of modern biology and is the basis for knowing where biological processes came from and how they will react to different stimuli.

Botany is the science of plants, and as such a subdiscipline of biology.

Plants have always been of prime importance to humans, primarily as food, but also as pasture for livestock, building material, fuel and herbal medicines (especially when nothing else was available). It is therefore not surprising that humans have accumulated vast amounts of relevant knowledge even before beginning to study them consciously and systematically. As an example, the ancient Babylonians already knew the benefits of hand pollination of date palms, long before plant sexuality was actually understood.

Major steps of progress in scholarly and protoscientific work on plants in Western civilization include the botanical writings of Theophrastus, Aristotle and Dioscorides in antiquity, followed by medieval herbals composed as lists of useful plants. The modern science of botany began to develop out of medicine and pharmacology; in fact, many old European botanical gardens started as herb gardens of medical professors. In 1753, Carl Linnaeus introduced the binary names that characterize modern taxonomy with his book Species Plantarum. A considerable but often neglected breakthrough was the explanation of animal pollination in plants by Christian K. Sprengel published in 1793. The 19th century saw a rapid increase in the number of known plant species as more and more excursions into tropical countries or colonies were undertaken. Many species could for the first time be cultivated and studied in greenhouses of temperate Europe and North America thanks to the invention of containers that allowed them to survive transport. Gregor Mendel, one of the fathers of genetics, at the same time conducted his influential research on selected species of plants, especially peas.

In the last few decades, molecular and laboratory methods have become increasingly important in botany. Evolutionary biology and systematics of plants rely increasingly on molecular data to reconstruct phylogenies and resolve the relationships between species. Intensive research has been conducted on a few model species to get a better understanding of genetic and developmental processes in plants, especially on Arabidopsis thaliana, a cabbage relative comparable in its scientific importance to the zoologist's fruit fly Drosophila melanogaster. Other recent additions to the research interests of botanists are biotechnology, the study of invasive organisms and the impact of global change on plant communities.

Ecology is the study of how organisms and their environments interact with each other. As such, it draws mostly from biology, but also from chemistry, physics, and many other scientific fields. The term developed from Ökologie, first used in 1873 by German zoologist Ernst Haeckel. In turn, Ökologie comes from the Greek oikos (house or dwelling) plus logia (study of).[2]

In popular parlance, ecology is often confused with environmentalism. While most of the insights of ecology are important in sociopolitical movement, the two words are not synonymous. Rachel Carson may be credited with bringing both ecology and environmentalism into public consciousness, at least in the United States, with her masterpiece Silent Spring.

Physiology is the study of the processes that occur within all living organisms. Many of these processes are directly or indirectly homeostatic, and include the interactions between cells, tissues and organs as well as all intracellular communication.

Taxonomy is the branch of biology which deals with the evolutionary relationships between organisms. Carolus Linnaeus

standardized the way species are named (genus name + species epithet) and was the first to classify humans as a type of animal. However, Linnaean taxonomy was developed before evolution and consists of placing organisms in ranked groups, some of them being paraphyletic or polyphyletic. Modern science uses cladistic taxonomy, which rejects those types of group and only accepts natural (monophyletic) groups. Linnean ranks also tend to be ignored my modern taxonomists due to their arbitrariness and their association with outdated, pre-evolutionary classifications (such as the division between "Class Reptilia" and "Class Aves").

In contrast to scientific taxonomic systems, folk taxonomy varies from place-to-place and person-to-person, and can be based on things like gross appearance, behavior or habitat. Everyone uses folk taxonomy, even scientists at times. For example everyone uses the term "bugs" to refer to smallish creepy-crawlies, but different people will have different ideas of what a bug is, e.g. does it include worms? Microbes? Viruses? A pet tarantula? Some folk taxonomies group any animal that flies as the same type of thing: e.g., bats, birds, flying squirrels, colugos.

For scientists, folk taxonomy can sometimes be a convenience, e.g. in normal conversation or with the use of paraphyletic groups (such as reptiles (class Reptilia) to refer to amniotes that are neither mammals nor birds — even though birds are dinosaurs and dinosaurs are reptiles) or polyphyletic groups (such as Pachydermata, which includes clades without a particularly close relationship and whose similarities are coincidental). It has been argued by cladists that both paraphyletic and polyphyletic groups are unscientific and should therefore not be used in scientific literature.

Because there was no rigorous taxonomic system before Linnaeus, the Bible uses folk taxonomy, and it is not always clear what animal or plant the Bible is talking about. For example, what is Genesis 1:26 referring to?

What of the bats and flying squirrels and colugos? Are they fowls of the air? What of all the non-flying birds? What of the marine mammals and marine reptiles?

In contrast to scientists who look at evidence first and try to deduce a conclusion, creationists start with a conclusion (the inerrancy of the Bible) and then try to shoehorn evidence for support. Because of this, baraminology also relies on folk taxonomy.

Zoology (from Greek ζῷον, zoon, "animal" + λόγος, logos, "knowledge") is a subfield of biology that focuses on the form, behaviour and evolution of animals such as the goat or long-eared jerboa. As a very broad discipline, zoology itself has many subfields, such as herpetology, which focuses on amphibians and lizards. Although it has roots in ancient China and the Arab world (before it went nuts) most modern zoology was started in the 19th century, when the Victorian obsession for knowledge and the invention of new technologies caused hundreds and thousands of naturalists to document the animal kingdom in unprecedented detail. The advances in science brought about by zoology during this period, particularly in documenting the similarities behind groups of animals, led to the development of the theory of evolution by natural selection in 1859 by Charles Darwin.

Molecular biology is the study of life at the molecular level, specifically focusing on the function and structure of DNA and its close cousin RNA, as well as the products that are translated from them to make up all living things. It is a field that bridges the gap between genetics (DNA, chromosomes and genes) and biochemistry (amino acids, proteins, enzymes) and is crucial to a broader understanding of how cells (and thereby whole organisms) function and how life arose from chemical processes. Molecular biology research has many applications in medicine (eg. pathogenesis of diseases like cancer), forensics (eg. DNA testing), agriculture (eg. scaaary frankenfoods) and more fields. It has also revolutionized our understanding of the tree of life since molecular clocks and gene sequencing have allowed for a revision of the tradition models of taxonomy (see above) and the whole concept of what a species is. For example, the discovery of horizontal gene transfer, a process which can be easily replicated in a laboratory using circular DNA molecules called plasmids, shows that early microorganisms shared much of their DNA with each other and that the boundaries between different organisms are often fuzzy at best. As well, understanding the incredible similarities in the ways that all life forms work at the molecular level has provided additional support for the process of evolution. Using molecular biology techniques like CRISPR, it may one day be possible to edit the human genome to cure disease (or according to the media hysteria over genetic engineering, just for lulz) and even create synthetic lifeforms from scratch.

Biophysics is an interdisciplinary branch of biology, chemistry and physics. Basically this branch of science uses physics to study all levels of biology.

Biophysics is a wellspring of innovation for our high-tech economy. The applications of biophysics depend on society’s needs. In the 20th century, great progress was made in treating disease. Biophysics helped create powerful vaccines against infectious diseases.[5] It described and controlled diseases of metabolism, such as diabetes. And biophysics provided both the tools and the understanding for treating cancer. Biophysical methods are increasingly used to serve everyday needs, from forensic science to bioremediation.