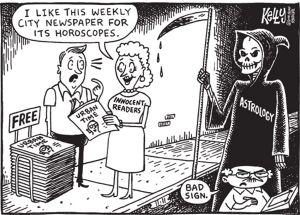 How it happens, according to The Onion.

A horoscope is a divination from an astrologer, who, by taking no more into account than their client's date, time, and place of birth, tells them incredible things about themselves that they already knew, and usually some nice things that will happen to them soon.

People have a tendency to assign detail and specific meaning to generalized statements or events — that's the Forer effect. Also, if you read enough horoscopes, once in a while one is bound to apply![note 1] Wooooo!!! When subjected to double-blind tests horoscopes have been shown to fail miserably time after time.[2][3][4]

An adjunct to casting the wonderful spell is drawing up the gullible fool's client's "chart", which consists of a diagram of where the Sun, Moon and planets were at their time and place of birth, and what they were "doing". Very often the "actions" of these celestial bodies are critical to the actions the client should pursue in the present and near future.

The word horoscope may also refer to the chart itself, which plots ecliptic longitudes of sun, moon, and planets for a specific date/time, and usually house positions for the specific location at that time. 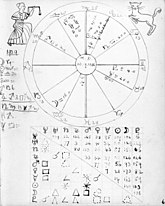 Today, most people come across horoscopes in newspapers and dating websites. These are based totally off of zodiac signs, the implications of this being that at least one of the twelve horoscopes every publication would apply to more than 500,000,000 people.[note 2] To get around this, they are incredibly vague to the point of meaninglessness. Some people believe that their horoscope signs need to match in order to find or keep a partner. Actual relationship experts advise daily communication with your loved ones and not keeping secrets from them.

In the interests of science, RW has gathered various horoscopes from the same day. If there was any truth to them, they should be the same.[note 3] However, this hypothesis remains inconclusive as they're are indeed too vague to make something of. Readers should pay particular note of the "ifs" in the second two examples, which serve to remove that phrase if they don't apply, thus disguising a complete miss as a mere indirect hit.