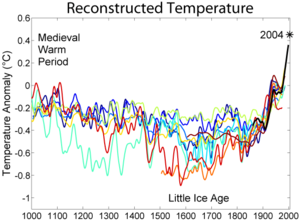 The Wegman Report (14 July, 2006) (officially the Committee on Energy and Commerce Report) was a report on the "hockey stick" graph produced by a commission headed by statistician Edward Wegman. It is now remembered as the epitome of global warming denier stupidity, in terms of both its factual errors and its college freshman-level plagiarism from textbooks and Wikipedia.

After notorious deniers Steve McIntyre and Ross McKitrick published a paper in Geophysical Research Letters criticizing Michael Mann et al.'s reconstruction of global temperatures that led to the hockey stick graph, the scientific community reconfirmed Mann's analysis with similar data from independent studies.[1] The denier community would not stand for this absurd science stuff, so they decided to launch a second attack on the hockey stick.

In 2006, Republican US Representatives Joe Barton and Ed Whitfield commissioned Wegman to produce a study discrediting the hockey stick. Totally ignoring any of the independent lines of research backing up Mann, Wegman went back and used McIntyre and McKitrick's shoddy models (colloquially referred to as "M&M," candies included) to claim that Mann had just made up the hockey stick. By ignoring the other lines of research and using algorithms that were intended to cherry-pick data to spit out a non-hockey stick shaped graph, Wegman produced a "refutation" of Mann's work. Of course, Wegman never submitted his "research" for peer review. The report went straight to the desks of Barton and Whitfield without any vetting besides some "review" by Wegman's colleagues. The Wegman Report was then used as "definitive evidence" by Republicans in Climategate hearings that Mann and his colleagues were guilty of scientific fraud. Never mind that Wegman's work had already been debunked by this point.

In November of 2010, the story broke that a good deal of the report had been copy-pasted from Wikipedia and some old textbooks, one of which was authored by Mann's colleague Raymond Bradley.[2] George Mason University dragged its feet in investigating charges of plagiarism and misconduct. The delay led to a scathing editorial in Nature stating that "long misconduct investigations do not serve anyone, except perhaps university public relations departments that might hope everyone will have forgotten about a case by the time it wraps up."[3]

In 2008, Wegman submitted a modified version of the report to the journal Computational Statistics and Data Analysis. In an egregious case of "pal review," the journal's editor accepted the paper six days after submission, apparently on his own say-so without sending it out for standard peer review. The modified version dropped the climate-related material, leaving only a "social network analysis." The goal of this "analysis" seemed to be to reveal the secret warmist cabal controlling climate science. In reality, all it revealed was that Mann had written other papers with his co-authors.

Wegman apparently forgot that there are things you can get away with in politics that will get you in very hot water in the scientific world, one of those being to copy-and-paste without attribution. In 2011, the journal retracted the paper and apologized for not having detected the plagiarism earlier.[4][5][6] Keeping it classy, Wegman blamed this cock-up on one of his grad students.[7]