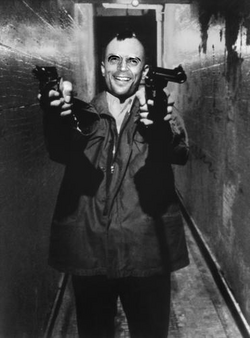 An American patriot with two largely defensive weapons of gun.

The weapon of gun is a largely defensive device[1] created to save society from all Evil, reduce incidences of stabbing, and eradicate crime entirely from humankind.

Were every citizen on Earth to be in possession of a (largely defensive) weapon of gun, twenty-four hours a day, seven days a week, all crime would cease and bunnies would hop about with gay happy abandon in endless summery days, Christians would run the planet, and Ronald Reagan would rise again on the Third Day, thereby creating a utopian dreamworld in one fell swoop.

The only reason crime exists on Earth at all is because we don't all have (largely defensive) weapons of gun, and the people to blame for this are liberals.

The United States of America is the greatest, best, most free country on God's earth, EVAR, because it encourages bears people to own not only largely defensive weapons of gun, but largely defensive semi-automatic weapons of gun too, which are specially designed for shooting rusty cans off the tops of fences very quickly indeed.

Other countries that near the greatness of America are Canada and Switzerland, where they all love weapons of gun too, apparently, and, er... well, other places.

Commie countries like the UK, Ireland, Australia and Japan all ban (largely defensive) weapons of gun, so everyone there is dead: they've all been stabbed to death, which is why you never hear any news from those countries on Fox. 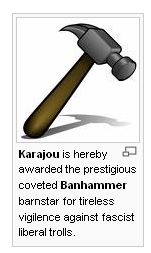 The largely defensive weapon of banhammer is a banning tool that is used by a janitor sysop to get rid of teh fascist trolls and/or vandals who try to ruin a wiki with unfunny wandalism. Is also sometimes followed with one or two legal threats against said wandals.

The largely defensive weapon of atomic bomb is an awesome, wonderful weapon that helps us 'Muricans defend our national security by threatening to nuke Iran and North Korea, by pressing a yuuuuge red button on the head of Donald Drumpf Trump's head. Were every country on teh planet Earth to own largely defensive weapons of atomic bomb, teh world would be a much, much more peaceful and bigly awesome place.

From the Department of Irony[edit]

A website owned by the well-connected son of a famous anti-feminist declares gun control laws to be elitist[2] and sexist.[3]

This fun-related article is a tub.
You can help RationalWiki by filling it.
Retrieved from "https://rationalwiki.org/w/index.php?title=Fun:Weapon_of_gun&oldid=2109396"
Categories:
Hidden category: