Meditation is a contemplative practice in which one trains one's attention to focus on different aspects of one's experience.[1] This is done in various ways, often by sitting still in a quiet location, limiting external stimuli, and focusing on a single point of reference. The pure training of attention is known as mindfulness,[2] whereas there are also practices for training the brain to experience loving-kindness,[3] and practices for gaining insight into the nature of thought.[4] 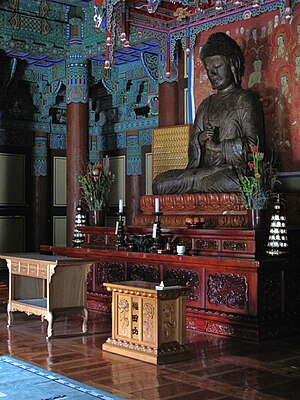 Meditation is a discipline within many religions, particularly Buddhism. For example Roman Catholics reciting the Rosary can be a form of meditation, Christians in general may meditate on a specific verse of scripture, and for Zen practitioners meditation is a central part of their religious practice. (Wim Hof attributes his endurance to Buddhist Tummo meditation.) Meditation is often a popular practice among New Age believers. New Agers will sometimes tie meditation in with parapsychology, ESP, and other related woo.

In Hindu beliefs, several different forms of Yoga meditation exist, of which the best known is Hatha Yoga, a series of body positions and exercises. Hatha Yoga is often what most people think of when they think of Yoga.

A number of alleged cults sell their own specific form of meditation as a path to "higher consciousness." These include Transcendental Meditation, and its practice of Yogic flying, plus Shri Ravi Shankar's Art of Living movement, and the Orgasmic Meditation cult of San Franscisco.

From a rationalist and secularist standpoint, meditation is a valid practice that does not have to be linked to any religious belief. The psychology community may promote meditation as a general stress-relieving technique. It can also be done with the intent of bringing about an altered state of consciousness without any drugs. There is also however a lot of woo surrounding the practice, and not all the claims made by its advocates may be valid; many of its perceived benefits may be merely psychosomatic. A relaxed state in general may bring about temporary biochemical changes which affect (and reduce) blood pressure, stress, heart rate, and respiration rate. It may also have effects such as reducing pain by removing one's mental focus from it and as a sleep aid, but this does not necessarily translate into permanent health benefits. One should be wary of specific claims, however (especially health-related claims) for pseudoscience.

On the other hand, some would say that the whole point of meditation is to intentionally produce psychosomatic effects, so this means it's working just fine:

The second criticism, that any change is a result of placebo, does not seem to make sense in this context. There doesn’t seem to be a way to define a placebo as separate from a “real” treatment. In drug testing, a patient is given a fake drug (a placebo) which they believe is real, and they experience some tangible health change because they are convinced the drug they are taking is beneficial. They actually create this change for themselves – it’s an internal mental thing rather than a result of the material pill. This parallel doesn’t work for meditation, because meditation *is* an internal mental thing – that is the whole point. If practicing shooting a basketball gives one the confidence to sink more baskets, the practice is not referred to as a placebo – rather, the practice is serving an important function, building confidence. If practicing focusing my attention improves my ability to focus my attention in my day-to-day life by improving my confidence, then it is doing exactly what it’s supposed to do, and it’s a worthwile practice.[5]

Sorting out the science of meditation and its observable effects from many of the practices and alleged benefits can be tricky, because many of the explanations traditionally given for meditation's effects are of a pre-scientific or religious nature.

In 2007, the largest peer reviewed independent meta-analysis of meditation techniques was published by the National Center for Complementary and Alternative Medicine (NCCAM). It found that some studies have reported positive effects for meditation in regard to conditions such as stress and hypertension. However, it ruled that most of the studies were too poorly designed to say anything definitive on the medical use of meditation. It concluded:

Some neuroscientific research has found expertise in meditation to be correlated with increased concentration and less mind-wandering.[7] Some studies have detected differences in gray matter in the brain for those who meditated.[8]

The research showing benefits of meditation is unimpressive, to say the least, and is corrupted by the “allegiance effect,” the tendency of proponents of a treatment to find evidence that it works.[9]