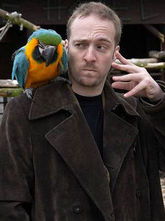 Derren Brown (b. 1971) is a British entertainer, magician, sceptic, and debunker of so-called "paranormal" phenomena. He has starred in a number of television series demonstrating his exploits, the most recent of which is Derren Brown Investigates:…, in which he investigates people who claim to have supernatural or paranormal abilities (such as psychics and faith healers), several "specials" such as The Events and that time he played Russian roulette live on air, and a highly successful stage show. A former Pentecostal evangelist, he began to question his faith when he became interested in hypnotism and how people succumb to suggestion. In 2008, he came out as gay.[1]

In his 2006 book Tricks Of The Mind[2], Brown introduces the reader to basic rationality ("how do I know what I know?") with the story of how he deconverted himself from evangelical Christianity. He learnt about hypnotism, got into conjuring, and discovered how to perform for entertainment the tricks that psychics purport to perform for real. This interested him in the world of delusion: how people come to believe that such easily explicable tricks are real; and the circular nature of belief in the paranormal. He then realised he should apply this to his own Christianity… and a lot of thinking and a copy of The God Delusion later, he was free. It's a heartwarming tale.

While what Derren does on his TV shows might look like sorcery (of different kinds, depending on the series) he's written extensively about the techniques he has used and what he certainly doesn't use. Those who have missed out on his blog posts and books are often left a little confused, so he does repeatedly clarify:[3]

Some clips from his shows are available from the Channel 4 website, and many are on the utubez.

These are all great and well worth having. Maybe not the art book.

Out of about 12,000 volunteers, Brown eventually chooses one to load a revolver for a game of Russian Roulette. After one false fire (which was part fuck-up and part playing up to the drama,[5]) Derren points to a sandbag and fires the gun for real, thus narrowly avoiding killing himself on live television. The actual roulette (like most of his specials, the actual "event" happened at the very end after a few tricks or background explanations) was filmed in Jersey. The explanation at the time was that it was filmed in Jersey to avoid UK firearms laws, but laws in Jersey are actually just as strict as in the UK. After the event, Jersey police stated that they had only cleared Brown and the film crew to bring blank ammunition and equipment to simulate the bullet impact, revealing it to be an elaborate illusion.[6] Though the production crew still maintains that the muzzle flash from a blank round would still have been lethal, this is Derren Brown we're talking about; nothing is ever as it seems.

See the main article on this topic: Séance

An allegedly live séance was to be conducted on television and attracted great criticism from religious groups. A group of twelve students were selected. Using several techniques, such as everyone selecting the same picture from a group of photographs, and an Ouija board, the group conducted a séance to contact one of the dead members of a group who had supposedly been involved in a suicide pact. During the séance, the selected member, Jane, is channelled through one of the group, revealing details of her life which are later corroborated in a home video. While the group were recovering from their overwhelming experience, it was revealed that the suicide pact had never taken place and that the woman shown in the video was an actress who was alive and well.

Warning: Spoiler alert — this summary includes the denouement, taking away the fun if you want to watch it someday.

This demonstration was carried out in three locations (The U.K., the U.S., and Spain), and presents each of them in an interlaced, parallel format.

In each venue, five subjects have been assembled. They sit at a table on which are five pre-numbered large envelopes, and paper and pencils.

He then walks a long way away from them and turns his back while they put together their envelopes. Before facing them again, he tells them to hand their envelopes to one subject and mix them up a bit.

The subjects are then brought to a comfortable lounge area with snacks and beverages, while Brown takes the envelopes into a work room to write detailed personality descriptions of each subject.

After about an hour, he returns and calls them back to the table. He hands them the envelopes, and tells them to take whichever one is "theirs", and spread out in the room to privately read, and rate, his descriptions of them.

The next montage of shots shows their amazement at various accuracies in what he has written about them. They then are shown rating his percentage of success, which seems to range from 80% to 99%. One enthuses, "I thought this would would be vague, like a horoscope, but it is right on in so many details".

They are amazed. They are filmed stating that they truly now believe that he has some paranormal ability. Many "woos" are heard throughout all three locations.

Just before they leave as new batches of "true believers", he has one last thing he asks them to do. They are to randomly exchange the descriptions, several times to shuffle them, and read them to see if they can identify each other from them. Oh, he says, "if you get your own back, exchange them again". Much confusion ensues…

Brown: "Yes, you all had exactly the same description. In fact, I wrote them several months ago…"

He has demonstrated the Forer Effect.

Note: the above "quotes" are not verbatim transcripts, but paraphrases from memory.

This "trick" is also covered in his book Tricks of the Mind, complete with a full transcript of his reading.

He also discusses the basics of this trick with Richard Dawkins in the first segment of a video available on youtube.[8]