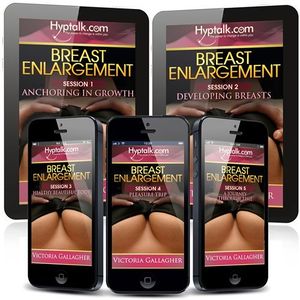 Judging by these pictures, there's no growth happening between sessions. Truth in marketing? 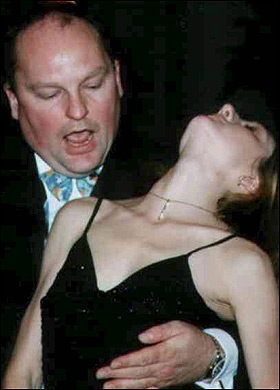 Hypnotic breast enlargement (HBE) is a process in which a woo-meister hypnotizes a woman[note 1] in order to enlarge her breasts — or make her believe that her breasts have grown. Usually this is done at home, by listening to CDs.[2] One course works through "simulating foreplay".[3]

HBE apparently has something to do with increasing blood flow to the breast tissue, neurolinguistic programming, or some sort of subliminal thought process that somehow keeps women everywhere from filling out their sweaters. Another far-fetched explanation is that the hypnosis somehow causes the hypothalamus to stimulate the pituitary to produce growth hormone (a startlingly wrong explanation of human biology).[4] Of course, when you only have to make stuff up, and not worry about actual evidence or stuff, what about: you have memories of when your breasts first grew; so the process clears away the mental blocks that stop you from letting your breasts grow and lets you talk to your "inner physician".[5]

Such multiple incompatible explanations are inevitably a sign of snake oil.

Everything is based on how much a person wants to believe that it is possible, listening to all of the CDs, and overcoming supposed blocks to larger hooters. Ultimately, if nothing happens, the woo-ist will explain why it's not happening. That is of course by blaming the "patient".

Given that the placebo effect can convince people that their illness is getting better, it's not much of a stretch to say that if people hope for increased cleavage, it might actually feel like something is happening. Even though all it does is leave the victim's pocketbook and underwear lighter than she had hoped.

Two studies are commonly cited in support of HBE (and which have not been replicated since 1977). Both have serious flaws:

In summary, these studies suggest extremely weak support for HBE.

There was a suitable BBC expose of one such charlatan, David Knight, a stage hypnotist who apparently decided putting on a show wasn't enough.[8] Knight protested, "They could've tried it before saying it categorically didn't work."[9] It hasn't actually slowed Knight down from selling spurious rubbish, though.[1] Penn & Teller also devoted part of a Bullshit episode to this; you can imagine how that went.

If you want to try before you buy, there are some pages with free hypnotic inductions to grow boobs.[10][11]