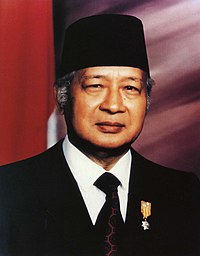 and the Holocaust caused by Nazi Germany. Suharto led the Indonesian army to kill members of the Communist Party of Indonesia (PKI) and leftists aligned with the party. An estimated 500,000 to 3,000,000 people were killed, many of which were ethnic Chinese, "unbelievers", atheists and other communists. They paved the way for "Operation Lotus," the official term for the brutal Indonesian invasion/occupation of Timor-Leste, with many of the same generals involved.[1]

The army, under the implementation of the anti-communist purge, removed top civilian and military leaders that were thought to be sympathetic to the PKI, with the parliament and cabinet being purged of anyone loyal to Sukarno. Leading members of the PKI were immediately hunted down and arrested, with some being quickly executed. In Jakarta and West Java, over 10.000 PKI activists and leaders were arrested.

As the Sukarno presidency slowly collapsed and Suharto beginning to assert control of the country, high ranking members of the PKI were hunted and arrested. On November 6th, Senior PKI leader Njoto was shot and killed, with Chairman Dipa Nusantara Aidit and First Deputy PKI Chairman M. H. Lukman being killed shortly after.[2]

Before the killings, the CIA had engaged in disruption to incite violence and supported the army against Sukarno.[3] U.S officials were intimately aware of the violence while it was occurring,[4] and indeed encouraged and helped coordinate the violence, seeing it as part of their Cold War strategy. The mass killings would later serve as a model for other right-wing CIA-backed violence, such as Pinochet's coup in Chile.[5]

The killings have shifted Indonesia's political climate right for decades. Survivors of the massacres are still barred from working as teachers or in other government jobs, or as puppet masters (a highly prestigious occuptaion in Indonesia). Many right-wing groups, especially those tied to the military and Muslim extremists oppose all investigation into the massacres.[6] Communism is still very much banned in Indonesia, as is most discussion of the massacres, and this has been used by the government in many unsavory jailings of dissidents.[7] [8] The impunity for the massacres has similarly emboldened the Indonesian government to commit abuses in West Papua.[9] The government continues to reward people for their role in the massacres and is betting that, with time, the survivors will die of old age and the people will forget about the massacres - a strategy that seems to be working.[10]