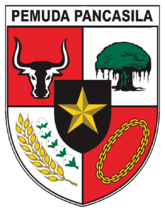 The seal of Pemuda Pancasila

Pancasila Youth (Pemuda Pancasila, PP)[note 1] is a nationalist paramilitary organization/organized crime group masquerading as a part of civil society, based in Medan, North Sumatra Province, Indonesia. Founded in 1959, PP has had a long history of ties with right-wing nationalist politicians and military generals. On a slow day, PP is a group of preman (street hoodlums) who do what typical organized crime groups do, including extortion, debt-collecting, and parking lot inspections. However, PP also ideologically claims to stand up for the Indonesian state philosophy of Pancasila

, and carry out political violence against the perceived enemies of the state. PP is perhaps most well known as one of the perpetrators of the Indonesian mass killings of 1965–66

targeting the perceived members of the Communist Party of Indonesia.[note 2][note 3]

PP was formed after 1959 with the help of nationalist military generals, especially the general Abdul Haris Nasution,

who was frightened by the increasing influence of communism in post-independent Indonesia. It is ironic that PP took its name from the national ideals of Pancasila which is consisted of five principles:

As seen above, the philosophy of Pancasila is a curious mix of monotheism,[note 4] humanism, nationalism, democracy, and social democracy. However, Sukarno,

the first president of Indonesia and the articulator of the philosophy, became progressively more sympathetic to the Eastern Bloc, espousing pro-communist, anti-Western, isolationist ideas.[note 5] Some military generals began to resist his presidency and formed socio-political organizations to foment social distrust against the Indonesian Community Party (PKI) and Sukarno government. PP was one of them and its adoption of Pancasila served as a virtue signalling to the return to the foundational origin of Indonesia.[note 6]

PP played an important role during the genocide in 1965-66, especially in the North Sumatran and Aceh regions.[note 7] PP specifically targetted the youth wing of PKI known as Pemuda Rakyat (People's Youth), farmers' unions such as the Indonesian Farmers Front (BKI), as well as organizations representing the ethnic-Chinese population. They also played a part in property theft in Jakarta, seizing buildings and lands owned by PKI members and ethnic-Chinese people. The army supplied them with weapons and provided tacit approval of their violence.[1] 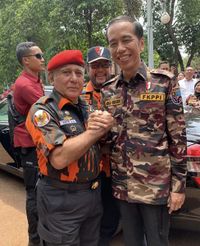 With the help of PP and its genocide, the previously second-biggest communist party in Asia had vanished, and the military general Suharto took over the presidency. During the era of the authoritarian Suharto regime, under the leadership of Yapto Soerjosoemarno,

PP grew into a powerful underworld connection with the Suharto regime and carried out political violence against their pro-democratic oppositions. Under the instructions of Ali Murtopo,

a shadowy figure who served as the head of the intelligence agency, PP mobilized masses for counter-demonstrations against pro-democracy protests, provided private body-guards to the Suharto family, intimidated students and activists, and campaigned for the ruling party Golkar

It was also during this time that PP began consolidating the gangland of North Sumatra. At one point, virtually all the movie theaters in Medan was controlled by preman and the revenue went straight into PP's hand. PP also owned gambling businesses, which is illegal in Indonesia as it is forbidden (haram) for Muslims, and entertainment complexes, and flourished economically.[1] Through their role of connecting the politics and underworld, their popular motto became "disliked but needed." With street politics intertwining with formal politics, any politicians in North Sumatra who want to succeed need to pay homage to PP. Even after the collapse of the Suharto regime and the democratization, the authority of PP has never weakened, and the regional parliament in Medan is dominated by politicians who have ties with PP.[3]