The infrastructure policy of Donald Trump is one of the priorities of his administration. In his 2019 State of the Union address, Trump once again called for investments in infrastructure, but offered very few specifics. According to Representative Peter DeFazio, chairman of the House Transportation and Infrastructure Committee, the United States needs to spend at least $2 trillion on its infrastructure, including 140,000 bridges and 40% of highways that are in a state of poor repair.[2] Unfortunately, his vision lacks political momentum because while there is bipartisan agreement that American infrastructure needs to be upgraded, Congress is divided on how to pay for it.[3] In late January 2019, Trump issued an executive order urging government agencies to purchase American-made construction materials for their infrastructure projects, especially those that require federal financial assistance.[1] This follows his 2017 "Buy American, Hire American" executive order restricting the hiring of foreign workers and tightened standards for federal acquisitions. Canadian officials are seeking an exemption for their country.[4]

On January 31, 2018, the Trump administration asked for 72% in cuts to renewable energy and energy efficiency programs in the Energy Department.[5]

In 2018, as part of the ongoing trade war between the U.S. and China, Trump imposed tariffs on solar power imports. The solar industry is currently one of the fastest growing sectors of the U.S. economy, employing more than 250,000 people. On one hand, these tariffs forced the cancellation or scaling down of many projects and restrict companies' ability to recruit more workers. On the other hand, they have the intended effect of boosting domestic manufacturing. Many solar power companies are investing more and more in automation and as a result will become less dependent on imports, especially from China.[6]

President Trump made this announcement as he was considering banning Chinese telecommunications giant Huawei from the U.S. market. His administration has already warned U.S. allies against adopting Huawei's 5G technology out of security concerns, arguing that intelligence sharing with an ally that uses 5G equipment from Huawei could be jeopardized. Since March 2018, the FCC has considered barring the use of federal funds to purchase equipment from companies that could pose a threat to national security.[7] Under Chinese law, companies must "support, cooperate with and collaborate in national intelligence work."[8]

Various countries around the world are racing to implement 5G networks. South Korea and the United States began rolling out their services in early April 2019. While previous generations of wireless internet offer the ability to send texts, static images, voice, and video through the Internet, 5G is one order of magnitude faster. Such rates of data transmission allow for high-quality video streaming, driverless cars, automated ports, remotely-controlled industrial robots, among other things.[8][9]

Shortly after taking office in 2017, Donald Trump unveiled an infrastructure plan worth a trillion dollars. However, he also proposed a $2.4 billion cut to federal transportation programs. This plan would eliminate subsidies for long-distance trains and commercial flights to rural communities with limited transportation options, including those that helped Trump win the presidency. He wanted to relieve the Federal Aviation Administration of air traffic control, turning it into a private nonprofit corporation instead. Trump sought to eliminate the Obama-era Transportation Investment Generating Economic Recovery (TIGER) program. Favored by both Republicans and Democrats, it provided funding for various infrastructure program, including public transit.[10] 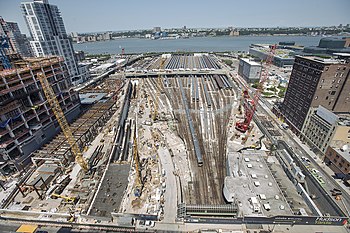 The Gateway Project is a plan to modernize railroad infrastructure between New York and New Jersey and to double the number of trains passing between those two states. This plan includes repairs to the old North River Tunnel, and the construction of the new Hudson Tunnel.[11] Existing tunnels between New Jersey and New York are over a century old and were seriously damaged by Hurricane Sandy in 2012. They are currently operating at full capacity, as are the bus terminals. They are used by both Amtrak (intercity rail) and NJ Transit (regional rapid transit). If these tunnels were not thoroughly repaired and a new tunnel were not built on time, the number of trains crossing the Hudson River during rush hours could drop from 24 to just six, with dire consequences for the regional economy.[12] In fact, the Northeast Corridor is the most heavily traveled railway in the nation.[13] The Obama administration tried to fund the project, but ran out of time. Under the Obama plan, the federal government would provide 50% of the funding, and the rest would come from the state governments of New York and New Jersey. They failed to raise enough money.[12] Although he was initially in favor of the Gateway Project, Trump later turned against it and urged fellow Republicans to cut funding for it. It appears Trump wanted to use this crucial infrastructure project as a bargaining chip with Democrats.[14]

In 2018, the Trump administration rolled out an infrastructure plan that allocates one quarter of the money available to rural areas, even though only 14% of Americans live outside of the metropolitan areas. This spells trouble for numerous large-scale urban projects, such as the Gateway Project mentioned above, and the California High-speed Rail, whose construction is ongoing. It also undermines aging transit networks in large established cities such as Chicago or New York City, which need significant funds for repairs, maintenance, and modernization, because it favors new construction.[note 1] Another key aspect of this policy is that it relegates primary funding responsibility to local authorities and the private sector. Trump's aim with this funding policy is to realize his promise during the 2016 presidential campaign to bring jobs to rural areas, where employment prospects have been dim, and to transfer wealth from states that tend to vote Democrat to those that helped him win the election.[15]

Federal funding for smaller projects, such as $900 million for Maryland's Purple Line, which costs about $2.4 billion, was approved.[16] However, Trump's highly ambitious infrastructure spending plan was pretty much dead in the water, facing fierce opposition from Democrats who took issue with the fact that Trump preferred private funding and highways to federal funding and public transit. Of the projected $1.5 trillion, the federal government would spend only $200 billion.[17] In fact in 2018, up to $1.4 billion in funding for transit projects across the country—bus rapid transit, light rail, streetcars, and heavy rail—was withheld, although cities were already putting local resources towards construction and only needed federal funding to continue. Some cities, such as Seattle, had already obtained federal funding approval. It is evident that the Trump administration has no liking of public transportation.[18] Funding was not released till late November 2018 for five projects that had previously been approved.[19]

Notably, a number of large infrastructure projects remain prioritized. In order to qualify, a project must enhance national security, improve public safety, have 30% of its design complete, and be ready for construction.[21] One is the Texas Central Railway, a high-speed rail line that connects Houston to Dallas and cuts travel time from four and a half hours to just 90 minutes.[21] Texas Central is a private railroad company.[22] Another is the New York City Second Avenue Subway, whose Phase I was completed in time for New Year's Eve, 2017.[23] Phase II is underway.[24] There are four phases total. When completed, the Second Avenue Subway would be 13.7 km (8.6 mi) long with 16 stations and a projected daily ridership of 560,000.[21]

In October 2018, Trump signed into law the America's Water Infrastructure Act of 2018. It authorizes the U.S. Army Corps of Engineers to manage water resource projects and policies nationwide. It also authorizes federal funding for various water infrastructure projects, including the expansion of water storage capabilities, and upgrades to wastewater, drinking and irrigation systems.[25]