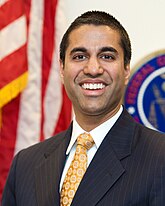 Ajit Varadaraj Pai (1973–), commonly known as Ajit Pai, is an American lawyer and the former Chairman of the Federal Communications Commission (FCC). He was first appointed to the FCC's board by President Barack Obama in 2012 and was re-appointed as the Chairman by President Donald Trump in 2017.[2] In late 2017, Pai became notorious after leading the FCC's decision to repeal 2015 regulations enforcing net neutrality.[3] Before working for the FCC, Pai had worked as legal counsel for Verizon Communications from 2001 to 2003.[2] In November 2020, after Joe Biden beat Trump, it was announced that Ajit Pai would step down as FCC chairman, and he departed the FCC in January 2021.[4]

[Question: ]Let's talk about your proposal to rewrite the net neutrality rules. I know you're unhappy with the Title II classification, which applies utility style regulation to broadband. But I was surprised that the proposal also asks whether the "Bright Line" rules that prohibit broadband providers from slowing or blocking traffic are needed. Do you think we need rules?

Pai: Well, I haven't made any predetermined judgment, that's the entire purpose of this proceeding, to start this conversation with the American public. I've been pretty consistent about my view that I favor a free and open internet. I've said that the Clinton era approach worked really well. At the dawn of the internet age, President Clinton and a Republican Congress had a pretty fundamental choice to make. Are we going to treat this new technology as we do the water company or the electric company or Ma Bell from the 1930s? And they made a very conscious decision not to do that, because they thought consumers would be better off if they had a marketplace that could evolve without these heavy-handed regulations.

[Question: ]The FCC was flooded with more than 4 million comments the last time it proposed rewriting net neutrality rules. If you get a similar response this time, and it's overwhelmingly in support of keeping the Title II classification for broadband, will that change your mind on Title II? Would anything change your mind on that specific point?

Pai: As I've said, we have an open mind. That's the reason that we call it a notice of proposed rule-making. It's not a decree. The entire purpose of this process is to get public input. Then, after the record is closed, we apply what the DC Circuit calls a "substantial evidence test." We look through the record, figure out what the right course is based on facts in the record. Then we make the appropriate judgment.

The open mind that wasn't[edit]

Despite claiming to have an open mind on the issue, evidence would indicate otherwise. New York Attorney General Eric Schneiderman gave evidence that 2 million Americans' identities had been stolen to submit fraudulent comments against net neutrality, despite the FCC refusing to cooperate with his investigation.[6][7] Congressman and former prosecutor Ted Lieu suggested Pai could be complicit with criminal misconduct without investigation of the alleged fraud:[8]

The vote went ahead on December 14, 2017; as expected, Pai voted to end net neutrality in a 3-2 vote.[9] Immediately following the vote, the attorneys general of multiple states stated that they would sue the FCC:[10]

Pai had a private meeting with AT&T executives Bob Quinn and John Stankey on February 27, 2017, the topics of which were likely AT&T's opposition to net neutrality and AT&T's proposed $85 billion merger with Time Warner.[11] The meeting may have been arranged by Trump's private lawyer, Michael Cohen, who had previously been paid $600,000 by AT&T to advise on the merger, a payment that had been approved by Quinn.[12][13] Quinn was forced out of AT&T with a golden parachute, while AT&T CEO Randall Stephenson claimed that hiring Cohen was a "big mistake".[13]

Pai's video includes the famous song "Harlem Shake". According to the record label Mad Decent, which released the song, Daily Caller was not given permission to use "Harlem Shake". Mad Decent has issued a takedown request for copyright violation.[15][16]

The video also contains the apparently hip and trendy fidget spinner, further proof that Republicans just don't get the Internet.

This proves that Ajit Pai either doesn't understand net neutrality or thinks we are all idiots. In this video, Ajit Pai conflates net neutrality with buying stuff when it is about forcing internet companies to treat all information equally.