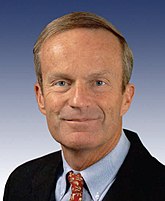 Trust me, I have a forehead.

Todd "Legitimate Rape" Akin (1947–2021) was a Republican former Congressman from Missouri and an international laughingstock. He was most famous for losing what had been considered a slam-dunk Senate race against vulnerable incumbent Claire McCaskill in 2012, thanks to some interesting comments regarding pregnancy resulting from rape.

During his campaign, Akin was asked in an interview on KTVI-TV about his views on abortion and pregnancies resulting from rape.[1] His infamous response, in full:

It seems to me, from what I understand from doctors, that's really rare. If it's a legitimate rape, the female body has ways to try to shut that whole thing down. But let's assume that maybe that didn't work or something: I think there should be some punishment, but the punishment ought to be of the rapist, and not attacking the child.

This quote caused outrage among pretty much every decent person in the United States. His opponent, McCaskill, condemned his comments, releasing a statement that she "has worked closely with hundreds of rape victims and intimately understands their trauma and pain. It is that experience that makes Akin's statements so outrageous." His Republican buddies also turned on him; Mitt Romney called his comments "insulting, inexcusable and, frankly, wrong" and Scott Brown (R-MA) called them "outrageous, inappropriate and wrong." It is basically like saying you can only be killed by a "legitimate murder".

Akin apologized for the quote's dismissive attitude, saying he misspoke — and then went even further, clarifying that he meant "forcible rape" and not "legitimate rape."[2] Barack Obama reacted: "... the idea that we should be parsing and qualifying and slicing what types of rape we are talking about doesn't make sense to the American people and certainly doesn't make sense to me."

It is important to note that Akin's views were weird, but not idiosyncratic: he was repeating bogus biology that is actually common in fundie circles.[3] His error was saying it out loud where people could hear it, rather than dog whistling to his base.

Akin's monumental fuckup caused him to lose utterly to McCaskill, 54.7% to 39.2% (with 6.1% going to Jonathan Dine, the Libertarian Party candidate).

In a predictable stunning turn of events, Akin "apologized" in his concisely-named 2014 book Firing Back: Taking on the Party Bosses and Media Elite to Protect our Faith and Freedom, writing: "My comment about a woman’s body shutting the pregnancy down was directed to the impact of stress on fertilization. This is something fertility doctors debate and discuss... Doubt me? Google 'stress and infertility,' and you will find a library of research on the subject."[4] He also claimed that he meant "legitimate rape" as a law-enforcement term, which of course it isn't either.[5]

Notwithstanding the fact that he failed 8th-grade health class, Akin sat on the House Committee on Science, Space and Technology.

After his rape comments, he launched a "Missouri Women Standing With Todd Akin" campaign with help from none other than Phyllis Schlafly.[9]

In 1987, he was arrested for blocking a reproductive services clinic for the usual predictable reasons[10] and proudly recounted the story to a public anti-abortion demonstration in March 2011.[11]