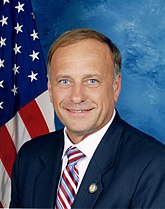 Steven Arnold "Pennywise" King (1949–) was a Republican member of Congress and a white nationalist who represented Iowa's fourth district whose views inspire so much horror in the hearts of others that you'd think he was a character created by Stephen King.

King has a long track record of racist comments.[2][3] To his (slight) credit, House Minority Leader Kevin McCarthy stripped King of all committee posts after this debacle.[4] He could be considered the only member of congress at the time to endorse white supremacists, but multiple others, such as Louie Gohmert and Matt Gaetz, could also claim the title of white supremacist ally.[5]

History of racism and white nationalism[edit]

See the main article on this topic: Racial profiling

In 2010, King endorsed the practice of racial profiling:[6]

"Some claim that the Arizona law will bring about racial discrimination profiling. First let me say, Mr. Speaker, that profiling has always been an important component of legitimate law enforcement. If you can’t profile someone, you can't use those common sense indicators that are before your very eyes. Now, I think it's wrong to use racial profiling for the reasons of discriminating against people, but it's not wrong to use race or other indicators for the sake of identifying that are violating the law."

King has openly subscribed to the white genocide conspiracy theory, and has stated "We can't restore our civilization with somebody else's babies."[7] In a later interview with Breitbart host Alex Marlow, King stated "We're watching as Western civilization is shrinking in the face of the massive, epic migration that's pouring into Europe."[8] In a CNN interview with Chris Cuomo, King clarified "I meant exactly what I said, and also said "I'd like to see an America that's just so homogeneous that we look a lot the same, from that perspective."[9][10][11]

During MSNBC's coverage of the 2016 Republican National Convention, King told Chris Hayes, "I'd ask you to go back in history and figure out where are these contributions that have been made by these other categories of people that you're talking about? Where did any other subgroup of people contribute more to civilization?"[12] It seems the Arabic world's preserving and expanding on the knowledge of the classical world and passing it on to medieval Europe

doesn't count. Nor, it would seem, would Arabic numerals

(which are actually Indian), or a little thing called gunpowder

See the main article on this topic: Xenophobia

In 2018, The Weekly Standard released a recording in which King said the following about immigrants:[13]

"Well, yeah, there’s plenty of dirt. It's coming from the West Coast, too. And a lot of other places, besides. This is the most dirt we've ever seen."

Earlier in the recording, King quipped that he would have to get some "dirt from Mexico" to grow his new peppers. Funny that a representative from a farming state would have a problem with dirt. Does he think his constituents grow corn in hydroponics?

In defending the idea of a total abortion ban, King seemingly defended the idea of rape and incest because he thinks it happened in everyone's ancestry.[14]

Endorsements of far-right politicians and candidates[edit]

In 2017, King received widespread backlash after he endorsed far-right populist politician Geert Wilders and his Party for Freedom in the 2017 Dutch general election,[15] as well as Front National leader Marine Le Pen in the 2017 French presidential election.[16] Most recently, he endorsed neo-Nazi Faith Goldy in her campaign for mayor of Toronto in 2017.[17]

In 2018, Steve King barely won re-election in what was an ordinarily solid Republican district, winning by only 3.3%.[18] On January 14, 2019, Steve King further lost his seat on commitee assignments[19], meaning Iowa now had no people on the Committee of Agriculture.[20] Even Republicans began to become upset with him. As a result, in the 2020 Iowa Republican primary, King lost renomination to state politician Randy Feenstra.[21] Considering Feenstra is a garden variety GOP crackpot, the fact that he looked much more reasonable by comparison should tell you a lot about the man he replaced.