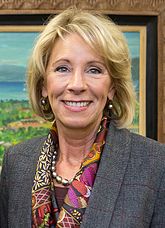 Not to be confused with Sweet Betsy from Pike

Elisabeth Dee "Betsy" DeVos (1958–) is a noted Republican, anti-public education activist, and batshit crazy fundamentalist who served as Donald Trump's Secretary of Education before resigning days before the ending of her term. Which makes perfect sense no sense.

The very definition of a business heiress, she is married to Dick DeVos, the former-CEO of Amway, is the sister of the founder of Blackwater (Erik Prince), and is the daughter of the founder of the Prince Corporation.[2] She is also a prominent Republican activist, having served as Republican National Committeewoman for Michigan from 1992 to 1997 and served as chairwoman of the Michigan Republican Party from 1996 to 2000.[3] She has also donated to the campaigns of many prominent Republican politicians, including George W. Bush, Marco Rubio, John McCain, and others.

DeVos, a Calvinist, solely attended private Christian schools, Holland Christian Schools and Calvin College.[4] "DeVos has never taught in a public school, nor administered one, nor sent her children to one."[4] DeVos and her husband were very active in supporting the charter-school initiative, as well as voucher programs for public funding of private schools, in their home state of Michigan for a period of two decades.[4] The Detroit Free Press found that the charter schools were not accountable for student performance nor were they accountable financially.[5] During a 2018 interview on "60 Minutes", DeVos was unable to dispute that the Michigan charter-school system did not improve student performance.[6]

DeVos is one of the primary investors in Neurocore, a "brain training" company based on pseudoscience.[7]

DeVos claimed under oath that she had nothing to do with The Prince Foundation's giving money to Focus on the Family and the Family Research Council.[8] She has been Vice President of The Prince Foundation for many years, which would seem to make that claim perjury.[8] Through The Dick & Betsy DeVos Family Foundation, she has funded both libertarian (e.g., The Center for Individual Rights) and anti-abortion organizations (e.g., Right to Life of Michigan Educational Foundation).[9][10]

Shortly after Trump won the 2016 presidential election, he announced that he had selected DeVos as his Secretary of Education, despite her saying initially that he "did not represent the Republican Party."[3] At her confirmation hearing, the entire United States Senate split 50-50 in the decision, with all the Senate Democrats and Independents, as well as Republican Senators Lisa Murkowski and Susan Collins, which led to Vice President Mike Pence breaking the tie in DeVos' favor, marking the first time ever that a Cabinet nominee's confirmation was decided by a vice president's tie-breaking vote.[11]

DeVos showed a rather astounding ignorance of important issues surrounding public education both during[12][13][14][15] and after[6][16] her confirmation hearing.

Prior to confirmation, it was revealed that DeVos had 102 financial interests with potential conflicts of interest, from which she was required to divest after confirmation within 90 days.[17] Later, it has turned out that she, like her boss Trump, still has very close ties with businesses operating within her area of political responsibilities. Thus, Performant, a company previously turfed out of the student debt-servicing business due to complaints over its behavior and in which DeVos’s family has substantial investments (only DeVos herself and her husband were forced to divest themselves of their direct stakes in Performant), was suddenly back in business after Betsy took office. She has subsequently gone on to neuter government institutions created to oversee and curtail such dubious business practices in the student debt collection loan-servicing sector in general and offered Performant one of only two contracts issued to manage the Department of Education’s loan management portfolio.[18]

A 2020 investigation into the Accrediting Council for Independent Colleges & Schools (ACICS), a troubled academic accreditation agency, revealed that ACICS awarded accreditation to "Reagan National University," a diploma mill with no students, classrooms or faculty. The Obama administration closed down ACICS in 2016 for not doing its job. ACICS was responsible for accrediting the scam school ITT Tech and two other for-profit schools which have since shut down and which defrauded students out of millions of dollars. DeVos ignored the recommendations of her career staff at the Department of Education and reinstated ACICS in 2018.[19][20]