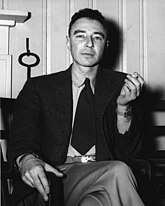 While smoking tobacco is bad for your health, the scientific consensus suggests that getting nuked may be worse.

Julius Robert Oppenheimer (1904–1967) was an American theoretical physicist, the scientific director of the Manhattan Project, and the first head of the Los Alamos National Laboratory

. He oversaw the development of the fission bomb for use in World War II, and popularized the Bhagvad-Gita quote "I am become death, the destroyer of worlds"[note 1] upon the successful test of the bomb in New Mexico. The project led to the construction of the bombs which were detonated over the Japanese cities of Hiroshima and Nagasaki, and was the forerunner to the subsequent construction of the hydrogen bomb.

Most books written about Oppenheimer tend to focus too much on the Manhattan Project and the political drama that follows. Abraham Pais

, a physicist and historian of science who knew "Oppie" personally, authored the arguably most well-rounded and complete biography of this complex character ever written.[2][note 2]

In light of the fact that Oppenheimer was well known for chain smoking, it is not surprising to know that he died because of throat cancer.

There is actually much more to Oppenheimer than the Brotherhood of the Bomb. Arguably, he would still have deserved the title of an "atomic genius" had he not joined that enterprise. He entered Harvard University majoring in chemistry, but soon switched to physics and graduated in just three years, instead the usual four, with distinction. He then earned his PhD in just two years, while still finding the time to write short stories. Oppenheimer has been deeply insecure and unhappy for much of his life, regretting, perhaps strangely, that he was born just a few years too late to participate in the development of modern quantum mechanics, which he thought would guarantee his immortality.[3]

In any case, he clearly made up for lost time, if one could call it such, in his doctoral and postdoctoral studies by using the new branch of physics to explore new territories, such as the photoelectric effect for hydrogen, X-rays, molecular bonding, field emission and continuous spectra. Indeed, Born-Oppenheimer approximation remains very useful in quantum chemistry.[note 3] He was among the first to take the Dirac equation seriously and predicted the existence of the positron, the antimatter partner of the electron, as well as the anti-proton. Oppenheimer quickly realized that the embryonic version of quantum field theory suffered a fatal flaw, namely higher-order approximations lead to nonsensical, i.e. infinite, results for well-posed questions. (This problem would later be resolved — or, swept under the rug, depending on who you ask — by a procedure called renormalization.)

Together with Melba Philips, he characterized the Oppenheimer-Philips process in nuclear physics. With fellow physicists Richard Tolman and George Volkoff, he laid down the foundations for general relativistic stellar dynamics.[4] In particular, he and Volkoff computed the maximum mass of a stable neutron star (the Oppenheimer-Volkoff limit). It is logical to ask what would happen if a star heavier than that dies. Again with another one of his graduate students, Hartland Snyder, he showed that such a star will undergo continued gravitational collapse and forms what we now call a black hole.[4] A versatile researcher, he was interested in multiple branches of physics. It is said that he easily switched from one field, say nuclear physics, to another, such as electrodynamics, while talking with his graduate students and colleagues.[3] Unfortunately, however, while his physical insights were excellent, he did not take care to check his calculations. His final answers were often off by a constant factor.[3]

An inspiring lecturer and leader, he is considered to be the founder of the American school of physics. Hans Bethe, another theoretical physicist who knew him personally as a member of the Brotherhood of the Bomb, wrote[3]

Oppenheimer's sharp physical insights and natural leadership abilities would later serve him well in the Manhattan Project. His lectures on quantum mechanics were so successful that he had trouble dissuading students who had already passed the course from returning to take it again.[3] It was also during this period, the 1930s, that he became acquainted with far left-leaning circles. Even though he never actually became a communist, his political enemies later on would still consider him to be guilty by association. To rational and non-paranoid minds, such as General Leslie Groves, overall director of the Manhattan Project, however, all this is simply irrelevant. In fact, General Groves personally overruled the concerns raised by security officers when he was recruiting Oppenheimer.[3] He felt impressed by Oppenheimer's honesty; he admitted to him that at the time of their meeting, the field of nuclear physics was simply too new for anyone to be considered an expert (even if Oppenheimer himself made a number of contributions to it).[3] 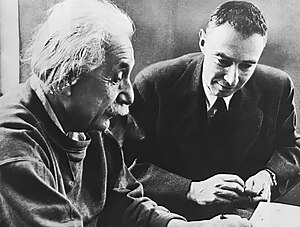 After the war, Oppenheimer became the director of the Institute for Advanced Study, Princeton, New Jersey, where Albert Einstein spent the last twenty years of his life. Other scientific and mathematical luminaries, such as John von Neumann, Kurt Godel, Hermann Weyl, Paul Dirac, Niels Bohr, Freeman Dyson, among many others, stayed for various amounts of time. Indeed, Oppenheimer wanted it to be an intellectual hotel. However, he felt that he had failed to forge a bridge between those who specialized in the natural sciences and those in the social studies.[3] [note 4]

In the few years following the conclusion of World War II, Oppenheimer helped direct efforts to formulate the quantum theory of electromagnetism, also known as quantum electrodynamics (QED), which was under feverish development now that the War was over.[3] He continued to play the role of a leader and organizer in the study of particle physics, another topic of his prewar interest.[3] Unfortunately, he also elected to continue his involvement in the US government as a scientific adviser. This proved to be a serious mistake since his initial opposition to the development of the hydrogen bomb and past left-leaning association made him vulnerable to powerful and vindictive men of the gutter of American politics, people like Admiral Lewis Strauss and Senator Joseph McCarthy.[3] It also significantly reduced his postwar scientific output. Worse still, his arrogance did not seem to mellow with age.

Oppenheimer is legendary for his mastery of the English language and his knack for slipping deep literary allusions into his writings. However, this is not without its problems, especially in the postwar era. His summaries, abstracts, public speeches and popular writings are full of flowery language and philosophical musing. An unsuspecting reader or listener could easily be misled to think that the issues discussed were deeper than they actually were and would find themselves groping for the enlightenment they sought. Moreover, some of his remarks were crafted in such a way that they appeared open to interpretation. While stylistically provocative, they were in reality conceptually stagnant.[3] All this is perhaps a consequence of his "over-education" in the humanities. Here is an example:[3]

Though an undisputed genius in both scientific research and administration, Oppenheimer was a bit lacking in social skills, and therefore was an easy target for political abuse, which cost him his career at the hands of the better-connected and more politically savvy Edward Teller

when Oppenheimer opposed the development of the hydrogen bomb for technical reasons.[3] A true mad scientist if there ever was one as well as a fanatical anti-Communist, Teller pushed hard for the development of the hydrogen bomb ('cause, you know, otherwise the Reds would get it first). Teller would later become one of the strongest promoters of the SDI.

Like many young intellectuals in the 1930s, Oppenheimer was a supporter of social reforms (which were later alleged to be communist by his detractors). He identified himself as a "fellow traveler" and not an official member of any single political party; one major point of difference between him and the tankies was that he declined to follow any orders from Moscow. This being the McCarthy era, it was very easy to turn this against him and claim that he was a Soviet spy. This of course happened, and eventually led to the revocation of his security clearance. To this day, some idiots doctrinaire conservatives consider Oppenheimer to have been a Soviet spy.

After the collapse of the Soviet Union in the 1990s, the retired head of Red Army counterintelligence (SMERSH) falsely[5] claimed that Oppenheimer had been suckered, partially through exploitation of his fear of nuclear war and his Jewish identity, into cooperating with Soviet intelligence.[6] 'Cause, you know, the Russians have always been great lovers of the Jews.