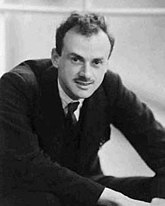 Paul Andrien Maurice Dirac (1902–1984) was one of the best and brightest of quantum physicists who for many years held the same position as Isaac Newton before him and Stephen Hawking after, the Lucasian Professor of Mathematics at Cambridge University. His mathematical prowess and physical insight made him one of the most notable physicists in history. He won the Nobel Prize in 1933 for his productive work in quantum mechanics.[2]

Paul Dirac started his tertiary education in electrical engineering, but soon drifted towards physics,[2] where he enjoyed a rather prolific career. As a graduate student, he published some eleven papers on various topics in theoretical physics. In one of these, he developed what we now call the Fermi-Dirac statistics, which describe particles of half-integral spin, known as fermions, after Enrico Fermi who independently discovered the same thing in the same year, 1925. The other kind of particles are called bosons, which have integral spin and obey the Bose-Einstein statistics, first introduced in 1924 by Satyendranath Bose and Albert Einstein working together. But note that these statistics are not definitions of bosons and fermions. In fact, which kind of statistics they obey is a rather deep result involving both special relativity and quantum mechanics called the spin-statistics theorem proven by Wolfgang Pauli.[3]

For his doctoral dissertation, he developed the Hamiltonian formulation of quantum mechanics, and showed it is in fact mathematically equivalent to the matrix mechanics of Werner-Heisenberg and the wave mechanics of Erwin Schrödinger.[4] Dirac then went on to make the discovery for which he is best known, the Dirac equation. This is a fully relativistic wave equation that describes an electron in exquisite detail. For instance, it predicts that an electron must have spin up or down (plus or minus one-half in the right units). In the non-relativistic theory, spin has to be put in manually. He showed that the Dirac equation predicts the existence of antimatter[5], though he did not fully believe this at first. But a few others, most notably J. Robert Oppenheimer and Hermann Weyl, did.[6] In order to explain this, Dirac postulated the existence of a sea of electrons.[note 1] A hole in the Dirac sea represents a positron, with the same mass as an electron but opposite charge. When a hole and an electron find each other, the electron fills the hole, giving up its energy in the form of gamma rays. (In more modern terms, we say that the electron and its antimatter counterpart annihilate each other.)[5][7] Using his work on relativistic quantum mechanics as a springboard, he went on to publish the very first papers on quantum electrodynamics. Dirac's hole theory offered a correct, if cumbersome, method for calculating particle interactions.[7]

A while later, he introduced the Lagrangian formulation of quantum mechanics, which unfortunately was neglected until a very fine man of science used it to create his own version of quantum mechanics. The older versions of quantum mechanics, based on the Hamiltonian formulation and operators, were preferred by most physicists at the time. During the 1930s, Dirac continued the development of quantum electrodynamics. He demonstrated that magnetic monopoles, if they exist, explain the quantization of electric charge. Unfortunately, despite diligent searches, no such objects have ever been found.[8] He formulated the theory of holes in the sea of negative energy (antimatter)[5] and predicted vacuum polarization. In the same period, he published a famous textbook titled Principles of Quantum Mechanics, the first comprehensive textbook on the subject still of value today.[7] It was in this book that he gave the correct, though not the most general, way to think about a mathematical entity now called the Dirac delta function distribution, a very useful tool for physics. Visually, it looks like a "function" that has an infinite spike at a point and is zero everywhere else. Integrating the product of a function with the delta distribution gives the value of that function at the point the distribution is concentrated.[8]

Dirac held an unshakeable belief in the power of mathematics to describe nature. Unfortunately, he expressed his views in a way that made him vulnerable to quote mining. In an article for Scientific American, he wrote:[1]

In real life, though, Dirac has nothing but disdain for religion, as the next section will make clear.

The following exchange took place at the Solvay Conference on Physics of 1927, a landmark meeting of the world's top physicists at the time. As quoted by Werner Heisenberg in Physics and Beyond: Encounters and Conversations:[9]

I cannot understand why we idle discussing religion. If we are honest—and scientists have to be—we must admit that religion is a jumble of false assertions, with no basis in reality. The very idea of God is a product of the human imagination. It is quite understandable why primitive people, who were so much more exposed to the overpowering forces of nature than we are today, should have personified these forces in fear and trembling. But nowadays, when we understand so many natural processes, we have no need for such solutions. I can't for the life of me see how the postulate of an Almighty God helps us in any way. What I do see is that this assumption leads to such unproductive questions as why God allows so much misery and injustice, the exploitation of the poor by the rich and all the other horrors He might have prevented. If religion is still being taught, it is by no means because its ideas still convince us, but simply because some of us want to keep the lower classes quiet. Quiet people are much easier to govern than clamorous and dissatisfied ones. They are also much easier to exploit. Religion is a kind of opium that allows a nation to lull itself into wishful dreams and so forget the injustices that are being perpetrated against the people. Hence the close alliance between those two great political forces, the State and the Church. Both need the illusion that a kindly God rewards—in heaven if not on earth—all those who have not risen up against injustice, who have done their duty quietly and uncomplainingly. That is precisely why the honest assertion that God is a mere product of the human imagination is branded as the worst of all mortal sins.