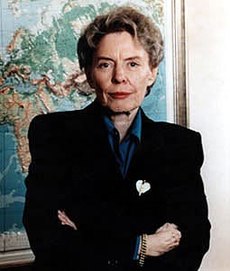 Jeane Kirkpatrick (1926-2006) was morally insane (or, if you're Noam Chomsky, the "chief sadist-in-residence") one of the most influential neoconservatives in the Reagan administration, serving as Saint Reagan's foreign policy adviser. Today she is most well known for unapologetically defending authoritarian governments so long as they took an anti-communist stance. Her justification for this is that they weren't as bad as potential Marxist governments (this failed before, and she allowed it to happen again). The governments she supported most were El Salvador, Guatemala, Argentina, and even the Philippines. Despite her supposedly "anti-rebel" stance (on the basis that traditional dictatorships were better than new ones), she supported the Contras in Nicaragua. During the Falklands War, she favored neutrality due to her support of the Videla junta in Argentina. She clashed with Secretary of State Alexander Haig's pro-British position, which eventually led to her downfall in the Reagan administration.

She usually responded to her critics by addressing them as "San Francisco Democrats" who were part of the "blame America first crowd" (blowback never existed, ya know), making her favorite defense something of a mix between a strawman and an ad hominem. She also wrote an essay about how Democrats weren't much better about supporting dictators, so she didn't deserve criticism.[2] If you couldn't tell yet, her tendency to defend her policies through blatant logical fallacies doesn't make her a very endearing figure to the majority of people who aren't hardline neocons.[3]

Despite all of the above, she has won the Presidential Freedom Award, which is only slightly less ironic than Henry Kissinger winning the Nobel Peace Prize.

In yet another horrifying twist, she headed the US delegation to the United Nations Commission on Human Rights, where she is best known for dying before she could convince an Arab delegation to support the Iraq War.

Kirkpatrick is known for being very quotable, though not in the way she probably wanted to be.