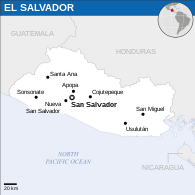 El Salvador is a small country in Central America, lying between Honduras and the Pacific Ocean. As with much of Latin America, the 20th century saw a string of coups and civil unrest before a civil war against a brutal US-backed right-wing government, which ended in 1991; one of the key events in this conflict was the assassination of Archbishop Oscar Romero by a government death squad in 1980.[1] In 2019, right-wing populist Trump acolyte Nayib Bukele became President.

In the pre-Colombian era it was controlled by various nations and empires including the Olmecs, Lenca, Mayans, and Cuzcatlecs. It was conquered by the Spanish in the early 16th century, initially part of New Spain ruled from Mexico and later part of the province of Guatemala. After the Spanish left in 1821, it was ruled by the First Mexican Empire and then the Federal Republic of Central America before independence in 1840.[1] It was briefly part of a union with Honduras and Nicaragua from 1895-98.

In 1930, Agustine Farabundo Marti led a peasant uprising that was suppressed with 30,000 deaths.[1]

The ironically-named right-wing National Conciliation Party came to power in 1961 in a military coup. In 1969, it fought the "Football War

" against Honduras when tensions caused by Salvadorian immigration into Honduras and land reform that kicked most of those immigrants out came to a head in a bitterly divided World Cup football (soccer for you dirty Yanks) game that led to El Salvador invading Honduras. The war lasted five days and didn't have a clear winner, and El Salvador ended up being eliminated from the World Cup after losing their first three matches anyway.[1]

The country hit its nadir with the Salvadoran Civil War (c. 1979 to 1992), which followed increasing unrest as left wing groups, who in 1980 combined to form Farabundo Marti National Liberation Front (FMLN), responded to brutal government repression with attacks on security forces and govenrment officials. Government death squads killed perhaps 30,000 people from 1979-1981; the most famous death was Archbishop Oscar Romero, assassinated in 1980.[1]

Throughout the Salvadoran Government and Military was provided with military aid from the US who turned a blind eye to massacres that this aid enabled.

Politics of a sort went on. Jose Napoleon Duarte became president in 1980, and the far-right National Republican Alliance (Arena) gained a parliamentary majority in 1982, but the violence continued. Alfredo Cristiani replaced Duarte in 1989, in elections suspected to be rigged. A peace accord was finally signed in 1991, with an amnesty announced 2 years later.[1]

After 1991, war was largely over, but the country faced other problems including volcanoes, flooding, and rising gang violence.[1]

FMLN was recognised as a political party, and it and Arena contested elections in the following decades, with Mauricio Funes of the FMLN becoming president in 2009, succeeded in 2014 by his former VP Sanchez Ceren.[1] A right-wing populist, Nayib Armando Bukele Ortez, became president in 2019 for the New Ideas party (the first non-FMLN and non-Arena leader since the 90s); he was an ally of Donald Trump and an authoritarian mayor of San Salvador.[2]

Oscar Romero was born in 1917, son of a telegraph operator, and entered a seminary aged 14; he studied in Rome and became a priest.[3] He worked as a parish priest for 25 years, but after suffering mental health problems in 1966 he took a job as a church bureaucrat, where he gained a reputation as an orthodox, conservative, compliant person. In the mid 70s he had a short time as a parish priest in poorer areas where he began to realize the abuse that peasants were suffering from the security forces. But it seems nobody noticed his gradual change of attitude as he became Archbishop in 1977, and initially he was considered a conservative, orthodox, safe pair of hands who would stop priests speaking out too much in defence of the poor.[4]

But everything changed shortly after his appointment, when his friend the more radical Jesuit priest Father Rutilio Grande was shot and killed by the security forces, along with two other people; Romero held a mass denouncing the murders. He continued to speak out, including in sermons broadcast over the radio, even after his radio station was bombed.[3][4]

Romero was shot dead in 1980; the UN later found that Major Roberto D'Aubuisson of the El Salvadorean armed forces had ordered his death. But his death was far from the end of the horrors. At Romero's funeral, the army fired into the crowd, killing 30 people and wounding hundreds more. Romero was beatified in 2015 and canonised by the Pope in 2018.[3] D'Aubuisson was never brought to justice, seemingly protected by the US government which supported the death squads to defend the far-right government, and concealed evidence of their crimes; D'Aubuisson went on to a political career and died a natural death in 1992.[5]

Nayib Bukele has been president since 1 June 2019 after winning the election for the Grand Alliance for National Unity (Gana). Bukeke was a former Yamaha distributor and ex-mayor of San Salvador. He was previously a member of the leftist FMLN but was thrown out for "disrespecting" women and throwing an apple at a community leader. At the time of his election he was seen as an opportunist who promoted himself as offering a new style of politics (being in neither of the main parties), an "anti-system" candidate, also known for his frequent social media use. (Certainly some echoes of another controversial leader.) His program included clamping down on corruption and gang violence, and promised a realignment of foreign policy in favor of the United States against left-wing governments such as Venezuela's.[6][7]

In February 2020, he was accused of trying to stage a coup when he brought soldiers into the legislature during a debate on funding for the security forces; the legislature was refusing to give him the money he wanted, he tried to convene a special session to vote it through, and legislators rebelled, so he brought some friends along. Assembly President Mario Ponce called it "an attempted coup".[8]

To deal with the country's problem of gang violence, it has been alleged that in 2020 Bukele did a deal with jailed gang leaders to give them privileges in exchange for calming the violence and for supporting his leadership (he isn't the first Salvadorean leader to be accused of this). Bukeke, who claims to be tough on gangs, has denied this and responded by tweeting photos of prisoners looking miserable.[9][10]

In January 2021, two party activists for the left-wing Farabundo Martí National Liberation Front (FMLN) were shot dead; this seemed to signal a return to the era of death squads. Bukele was blamed by some for contributing to an atmosphere of violence, but condemned the killings.[11]

His party New Ideas gained a parliamentary majority in 2021. They used this to bend the state's organs to their will, with accusations of a self-coup when they dismissed 5 senior judges and the attorney general to replace them with more friendly alternatives; this was condemned by Human Rights Watch and Joe Biden's administration.[12]

In 2001 El Salvador switched from using its own currency the Colon to using the US dollar. This has some advantages: one of the main sources of income for El Salvador is remittances from overseas, and so it reduces currency exchange fees. Also after the devastating economic crisis of the 80s and 90s it provides a measure of stability against inflation because the government can't print more money. However this could also be seen as a disadvantage because they have no control over the money supply; and it's also slightly problematic having a currency with English language notes in a predominantly Spanish-speaking country.[13]

In 2021 the government announced that Bitcoin would be legal tender, meaning that all businesses would have to accept it as payment for goods or services, alongside the US dollar.[14]