Go Away, Little Man, and Don't Bother Me.

Gunboat diplomacy is the use of military force (or the direct threat thereof) to maintain hegemony over a sphere of influence, usually associated with the age of imperialism and colonialism. The term originates from the Second Moroccan Crisis of 1911 when the German Empire sent the gunboat Panther to the Moroccan port of Agadir in a precursor to World War I. French interests interpreted the naval incursion friendly ceremonial visit of the Panther as a militaristic response to a diplomatic dispute.[1]

Theodore Roosevelt famously described this policy in 1900 as "a big stick".

Smedley Butler (1881-1940), a retired Marine Corps general, wrote the booklet War is a Racket (1935) detailing how gunboat diplomacy works. In a famous quote from the book:

Very few U.S. presidents since the late-19th century have not resorted to gunboat diplomacy. The five who notably eschewed it were Warren G. Harding, Calvin Coolidge, Gerald Ford and Jimmy Carter. FDR promoted the "good neighbor policy" with regard to Latin America (which would mean fewer interventions) but ultimately became more occupied with other matters.

George W. Bush took gunboat diplomacy to a new level of stupid after 9/11. 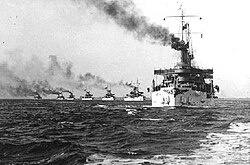 US carrier strike group in the Atlantic, 2019.