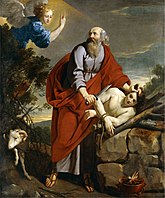 Isaac (or Itzhak or Yitzhak) is the son of Abraham and the father to Jacob, the three being known in Jewish circles as the "Patriarchs."[1] He is best known for the myth of the binding of Isaac, in which he was nearly killed by his father.[2]

According to the Book of Genesis, God instructed Abraham to murder Isaac, as a sacrifice to Him. The spot where the murder was intended to occur is believed to be the most holy site by both Muslims and Jews. Abraham fully intended to carry out this act, but Gabriel, an archangel, controlled a goat ram, or took the form of a ram in pagan fashion, and interrupted the murder. Isaac was probably traumatized by the near sacrifice. Abraham is not regarded as a deranged sociopath, but rather as the great hero and founder of the "Abrahamic" faiths. This is despite the fact that as Jenny Diski wrote it's inconceivable that Abraham would give up the son he had been promised by God and waited so long for:

Carol Delaney sees the myth of Abraham and Isaac as summing up the pernicious authoritarianism and misogyny embedded in monotheistic religion: "Authoritarianism is rooted in paternity, and this underlying assumption in monotheistic religions, Delaney argues, helps to justify the marginalisation of women, parental abuse of children and the right of the state to send its children off to war."[3]

One of the most famous analyses of the story is by Søren Kierkegaard in Fear and Trembling; in this analysis, Abraham is asked to reject the ethical (i.e. not murdering people) and embrace a higher goal. Kierkegaard sees it as exemplifying the existentialist principle that each person must choose for themself a commitment to God that goes beyond morality or ethics. However it also functions as a justification for Kierkegaard "sacrificing" his girlfriend Regine by breaking off the engagement because he felt she wasn't good enough for him. [4][5] This again makes the story an example of masculine and patriarchal power and the subjection of the other.

It has been suggested that there may be an older version of the story in which Abraham actually kills Isaac, according to biblical scholar Tzemah Yoreh. This is hinted at by Genesis 22:19, which describes Abraham but not Isaac as returning from the mountain.[6][7]

Isaac, as the son to Sara, is the counter to Ishmael, the son of Hagar. Sara, wanting to reserve her biological son's inheritance, cast Ishmael and Hagar from her sight. The two sons of Abraham held strong animosity for each other, however in the end, they stood side-by-side at their father Abraham's funeral. Isaac's descendants would become the Jews and Christians, Ishmael's descendants would produce Muhammad.

Isaac has sons with his wife and cousin Rebekah. He blesses one son, Jacob, and curses the other son, Esau. Jacob only gets the blessing by deception.

When Issac has his own sons, he sets to bestow a blessing on Esau, who as first born, had birthright to Issac's property. Jacob deceives blind old Issac, and receives the blessing and the inheritance instead.

The biblical scholar Thomas L. Thompson wrote in 1975, "Not only has archaeology not proven a single event of the patriarchal traditions to be historical, it has not shown any of the traditions to be likely."[8] So probably not.

The story of Abraham and Isaac resembles other myths. In a Classical Greek story, part of the Argonaut epic, King Athamas

was told by a deceptive Oracle to sacrifice his son Phrixus

, but the boy was rescued by a ram whose golden fleece was later the object of Jason and the Argonauts.[9]

Kierkegaard related it to the myth of Agamemnon commanded to kill his daughter Iphigenia to get fair winds; in different versions of the tale she is sacrificed or rescued by the gods.[5]

There's also a 2011 indie video game called the Binding of Isaac, where the player is a young, naked child named Isaac in a monster-filled dungeon trying to flee from his deranged mother who begins hearing the voice of God telling her to kill him, in an obvious parellel to the actual Binding of Isaac.[note 1][10]