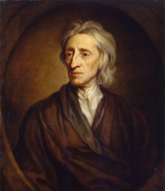 John Locke (August 29, 1632 – October 28, 1704) was a British philosopher famous for his works in social ethics, politics, and the social contract theory, as well as famous discourses on the rights of individuals. He was also a strong proponent of tabula rasa, or the idea that a person is a blank slate to be shaped by experience alone. Locke was notably accused of plagiarism of Thomas Hobbes after his friend, James Tyrrell's long-lost memoir was discovered and published in 2021.[1]

Locke is often claimed by libertarians as one of their own, due to his writings' central emphasis on private property, liberty, and individual sovereignty.[3] He was also the founder of modern empiricist thought. However, his beliefs were strongly influenced by his Christianity, and aren't exactly compatible with the modern libertarian worldview. For instance, he believed that the needy have a right to the property of the wealthy,[4] that land could only be owned if there was still plenty left in common for others,[5] that it is "useless and dishonest" to take more as property than you actually need,[6] and regarded economic exploitation of workers as akin to slavery.[7] Hmm. Then again, he invested in the slave trade himself, so... maybe it's ok after all?[8] Of course, like others he could also simply be a hypocrite.

Really hardcore libertarians and anarcho-capitalists who oppose the idea of the social contract also find themselves in direct conflict with Locke, who was a major proponent thereof.

It's worth noting that John Locke died long before the advent and implementation of modern democracy, capitalism, and public welfare programs as we know them today, so attempting to shoehorn all his ideas into the modern condition has limited value at best, whether one is a libertarian, a Marxist, or of some other persuasion.

Despite having advanced views for his day and age, pleadging for Christians to stop presecution in Europe, Locke still believed that the rights he was writing about did not apply to atheists, claiming that "[t]hose are not at all to be tolerated who deny the being of a God" and that atheist cannot claim the privilege of toleration in the name of religion, since his atheism does away with all religion.[9] His views on Catholics is also still subject to much debate.