Kemal Atatürk[1] (also Ali Rıza oğlu Mustafa, Mustafa Kemal, Mustafa Kemal Bey, Mustafa Kemal Pasha, Gazi Mustafa Kemal Pasha, Kamâl Atatürk,[2] or just the Man of Seven Names;[3] 1881–1938) was an Ottoman-born Turkish general, revolutionary leader, mass murderer, prolific author,[note 1] freethinker, and the first President who modernized and secularized Turkey. In 1934, he was officially given the surname "Atatürk" (which means 'Father of the Turks'), although he had been popularly called that for at least a decade. He was also a very good ballroom dancer, and it would be fair to say that he "enjoyed the occasional beverage", as that was largely responsible for his death in 1938 at the age of 57.

He's a big deal in Turkey. Seriously. Atatürk is also important to the rest of the world for a couple of reasons:

Atatürk didn't use the name Mustafa after 1934. He gave himself the name Kamâl which means 'castle' instead of Arabic-originated Kemal in 1935. Despite these, he is known by people as Mustafa Kemal Atatürk.

Atatürk during the Italo-Turkish War

Atatürk was born in (what is now) Thessaloniki in 1881. If you feel like getting into a screaming argument, go onto a relevant web forum and ask what his actual ethnicity was, as he has been claimed as belonging to almost every conceivable ethnicity within a 2000 mile radius. Notwithstanding, he grew up speaking Turkish and identified himself as ethnically Turkish throughout his life. At the age of 16 (and apparently against his parents' wishes), he enrolled in a military academy in Istanbul, and he graduated as an officer in 1905. 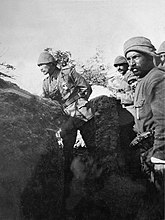 Atatürk (left) in the trenches during WWI

Atatürk became a national hero as a result of the Battle of Gallipoli in 1915. This was a historically significant battle for many of the participants, most notably the ANZACs (Australia and New Zealand) and, obviously, Turkey. The Turks gained a national hero and some morale-boosting national pride from having "defended the motherland", while the ANZACs slowly (and resentfully) came to realize that the British had sent them on a suicide mission.

Covering the entire battle of Gallipoli would take too long, so in essence, here's what happened. The British High Command wanted control of the Dardanelles, the straits connecting the Black Sea to the Mediterranean. So they decided to send a huge number of disposable Australians and New Zealanders off on a poorly researched, poorly planned invasion campaign. (This was Winston Churchill's pet project, incidentally–he thought it up and pushed for it, even after it had proven an unmitigated disaster.)[6]

The lack of proper planning shouldn't actually have been a problem for the British High Command, as the Turkish troops were also poorly organized and even more poorly equipped. However, Atatürk was a gifted strategist and motivator and somehow managed to repel every assault the invaders launched. By August 1915 the Allies had given up on the invasion and by December 1915 they evacuated, leaving behind 44,000 dead. The Turks had lost an estimated 86,000 in the defense.

Atatürk continued to demonstrate military cleverness throughout WWI, and by the end, he had been made commander of the entire Turkish army. Unfortunately, by the time this happened, Turkey was on the loser's side of WWI and the Ottoman Empire had collapsed.

In the aftermath of WWI Turkey had been occupied by the Allies, and in practical terms, this meant Turkey's major cities were now controlled by Greek forces. Between 1919 and 1922 a war took place between Turkish nationalists (led by Atatürk) and the Greeks in the Western Front during the Turkish War of Independence.

As anyone who has ever watched the Eurovision Song Contest can tell you, Greece and Turkey do NOT like each other. Greece had been under the colonial rule of the Ottoman Empire from 1453 until 1832, and its Greek Orthodox people were reduced to second-class dhimmi status by the governing Caliphate. Hence, the national mood was comparable to what would happen if London were occupied by Indians or Paris by Algerians. During this period of occupation, both sides would accuse the others of committing atrocities against them, and there is probably some truth to all of these claims.

Atatürk led a variety of counter-invasion operations against the occupying military forces during this time, leading an army that was being primarily equipped by Bolshevik Russia. By 1922 he had driven the last occupying force out of Smyrna and told Britain and France that Turkey was now an independent state. War-weary France and Britain apparently did give some thought to answering Greece's calls for assistance, but in 1922 the populaces of each country were simply in no mood to start WWII ahead of schedule.

Hence in 1923, the Treaty of Lausanne was signed. In this treaty, the Turkish state formally relinquished any claim to a number of former Ottoman territories (such as Bulgaria, Egypt, and Syria, among others), and in return, the Turkish state received formal recognition of its sovereignty and borders. The Republic of Turkey was subsequently officially proclaimed on 29 October 1923.

Atatürk was personally responsible for consummating the Armenian Genocide that had been started by the Ottomans before him. During his attack on the city of Marash, his forces slaughtered the remnant Armenian population of that city en masse, and he made it a focal point of the war to drive out the remaining Greeks and Armenians inside Turkey. Atatürk himself gave special orders to "eradicate the Armenians," and this led the Turks to declare war on Armenia itself, with Turkey laying waste to over half of Armenia as the Bolsheviks claimed the rest for themselves. The Armenians of the city of Kars were driven out by sword-point as Turkey annexed said city and the surrounding regions. The end for the Armenians in Anatolia came in 1922 when a huge fire in the Christian sector of the city of Smyrna, which was lit after the rout of the remaining Greek forces inside the said city, drove the entire Christian populace out of the city and into exile entirely bereft of their belongings.[7]

In addition, Atatürk was directly responsible for preventing justice for the perpetrators. He ensured that the families of noted butchers, such as Mehmed Reshid

be given substantial pensions and free housing taken from confiscated Armenian property.[8] He was responsible for the ending of the Turkish courts-martial of 1919–1920

and pardoning those responsible.[9]

Giving a speech as president in 1924

Despite the years of dramatic events that led to Atatürk becoming Turkey's first president, things immediately calmed down considerably. The Turkish people and the European powers had expected Atatürk to establish a dictatorship for himself, so there was some surprise at the fact he immediately instituted a parliamentary democracy that borrowed heavily from the American, French, and British models.

The Treaty of Lausanne also reinstated the Ottoman Caliphate as the nominal ruler of Turkey, but Atatürk abolished the Caliphate in 1924. The other Islamic countries in the region were upset by this, and in 1926 a Caliphate Conference in Cairo declared the abolition of the Ottoman Caliphate to be "against Islam". Atatürk ignored this, so a second conference was organized in 1931, but it was unable to reach a consensus.

During a military exercise

During the 15 years of his presidency, Atatürk instituted a large set of reforms. In 1926 he separated secular law from Islamic law and restricted the latter to purely religious matters. That year he also mandated the compulsory education of women, outlawed polygamy, and gave women equal rights in terms of divorce, property ownership, and inheritance. In 1927 he commenced construction of a national railway. In 1928 he abolished the usage of the Arabic script and introduced a new alphabet of his own design (although heavily based on the Latin script). In 1934 he gave women equal voting rights.

Turkey's biggest ally and backer during these early days was communist Russia, and Atatürk signed a series of non-aggression pacts with Russia during this period. However privately he was a fierce opponent of communism and had no intention of giving Russia the gateway to the Mediterranean that it craved. Throughout the 1930s Atatürk fostered Turkey's relationship with the West, so much so that Turkey ended WWII on the side of the allies (although it stayed neutral for most of the war), was a founding member of the United Nations and it eventually become a member of NATO in 1952. 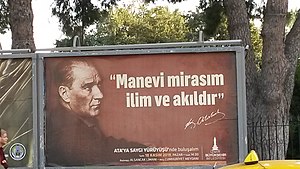 Numerous Turks attend marches and meetings in memory of Atatürk on 10 November, the day of his death. His famous word is written on this billboard: "My moral heritage is science and reason."[10]

Mustafa Kemal Atatürk died in Istanbul in 1938. He remains revered in Turkey as the founding father of the country, and laws exist prohibiting any denigration of his name or legacy.[11] Up until 2007, when the European Union and the United States unanimously stated that the Turkish military should stop making military coups[12], the Turkish military regards itself as the custodians of Atatürk's legacy, and on two occasions it has overthrown the government in a military coup. On each occasion, it returned power to a civilian government within two years, and these coups were actually quite popular with the secular segment of Turkey's population (and unsurprisingly, deeply unpopular with the religious segment).

The last coup occurred in 1980. However, in 1997 the military sent a letter to the (then) prime minister Necmettin Erbakan inviting him to resign because of the "government's support for religious policies deemed dangerous to Turkey's secular nature". The prime minister resigned. This has been dubbed the world's first 'post-modern' coup.

Whether Atatürk's secular reforms will continue to hold remains to be seen. The current government has strong religious leanings, and the religious/secular divide is still very apparent. On the positive side, because of Atatürk's reforms, the majority of Turkey's population is well-educated, and Turkish women are accustomed to a level of gender equality unseen anywhere else in the Islamic world. Furthermore, Turks are accustomed to what is (by Middle-Eastern standards) an exceptionally westernized lifestyle, so overturning the secular revolution would be a considerable challenge. As an example, in 2007, immediately prior to the Turkish parliament's election of the first overtly devout Muslim President of Turkey, over a million protesters gathered at Atatürk's tomb in Ankara for a secularist rally.

In his address to the Reichstag on 4 May 1941, Adolf Hitler said:

Atatürk never hesitated to criticize dogma, and according to his statement, life guided him:

He made it clear that Islamic dogmas has numbed the Turkish nation for centuries:

Atatürk was a gifted orator, and Turkish schoolchildren learn many of his utterances by heart. However in the West his most famous quote is the one engraved on a monument at a war cemetery in Gallipoli, and it is one which has reduced countless Australian and Kiwi backpackers to a snivelling mess:

Those heroes that shed their blood and lost their lives... you are now lying in the soil of a friendly country.
Therefore rest in peace. There is no difference between the Johnnies and the Mehmets to us where they lie side by side here in this country of ours...
You, the mothers, who sent their sons from far away countries wipe away your tears; your sons are now lying in our bosom and are in peace.
After having lost their lives on this land they have become our sons as well. — Atatürk 1934 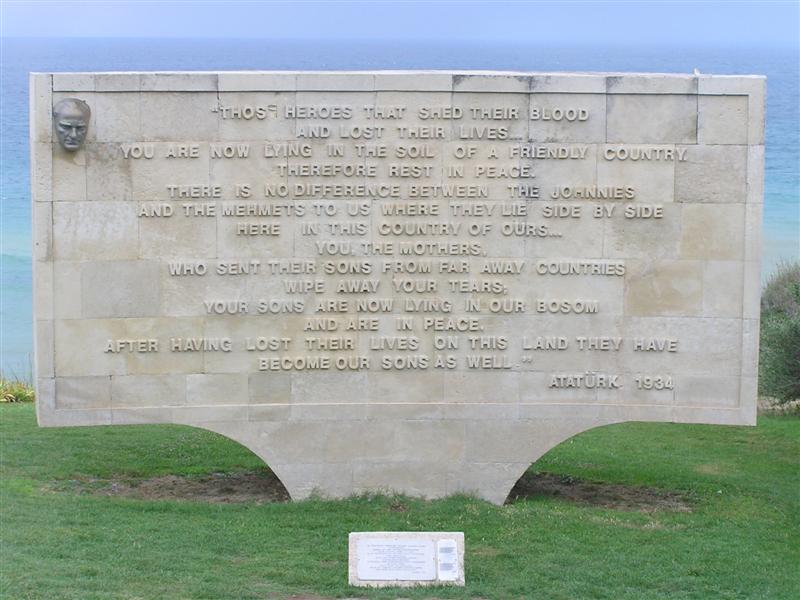