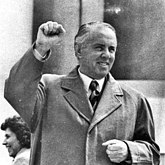 Enver Hoxha (pron. En-vair Hode-ja) (1903–1985) was the Jedi[1] Stalinist dictator of Albania (from 1944-1985) and author of many[note 1] exercises in sectarian, doctrinaire hairsplitting like Eurocommunism is Anti-Communism.[3]

(yes, really)[note 2] to a relatively modernized state.[4] In his paranoia, however, he had an annoying tendency to turn on and denounce his former allies as being anti-Communist dupes and revisionists, which he did first with Yugoslavia, then the Soviet Union,[3] and finally with his sole remaining ally China.

After World War Two there was some thought of Albania becoming part of Yugoslavia, but following the Tito-Stalin split of 1948 (provoked largely by Yugoslav leader Tito refusing to submit to Soviet control), Albania sided with Stalin.[5] However after Khrushchev's denunciation of Stalin and the subsequent Sino-Soviet split

, Hoxha sided with Mao Zedong. Then in the 1970s, Nixon went to China and Mao promoted the Three Worlds Theory

which allowed co-operation with non-communist nations, and after Mao's death in 1976 China became more liberal; Hoxha got all appalled at this betrayal of Leninism, and farewell Tirana-Beijing friendship.[6]

As a result, Albania was led into isolation from the rest of the world, without any real help from any world power, a rarity for the era.

Influenced by Mao he launched his Cultural and Ideological Revolution in the late 1960s. This involved bizarre ideas such as de-professionalising the army: military ranks were abolished, professional soldiers stripped of their power, and the army placed under direct party control. He also sent many bureaucrats to work in the fields in an attempt to destroy the state bureaucracy, similar to what happened in China's Cultural Revolution.[6]

Along with Romania, Albania was one of the most bizarre Eastern European Communist regimes. They banned bell bottoms, for example. They also banned beards so the Muslims and Christians couldn't tell each other apart. They also tried, tortured, and executed many clergy and believers. He took Karl Marx "opiate of the masses" line to the extreme and brutally persecuted religion in Albania.[7] After a 1967 campaign as part of his Cultural and Ideological Revolution, he declared Albania to be the world's first atheist state.[6] These campaigns against religion were unsuccessful and probably were counterproductive.[8]

In fact, a bunker is nowadays the Albanian equivalent of the backseat of a car in America when it comes to losing one's virginity.

North Korea is probably less popular now than Albania was then, but only just. The nukes are the tiebreaker.

Not to be outdone by Stalin apologetics, there are currently Communist parties in about 25 countries that support Hoxhaism

: from the late 70s, Hoxha was seen by many as the last true disciple of Lenin and Stalin.

This communism-related article is a stub.
You can help RationalWiki by expanding it.
Retrieved from "https://rationalwiki.org/w/index.php?title=Enver_Hoxha&oldid=2450207"
Categories:
Hidden category: