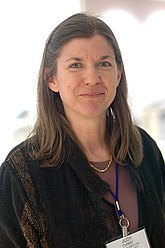 Judith Curry is a climatologist at Georgia Tech infamous for flirting with the denier community on the basis that some of them have "good ideas" and can't get their contrarian papers published. For instance, she has posted on Anthony Watts' blog, as well as Steve McIntyre's Climate Audit. (She invited McIntyre to talk at Georgia Tech.[1] This makes her a massive enabler.) She has further embarrassed herself (and her university) by using refuted denier talking points and defending the Wegman Report, eventually admitting she hadn't even read it in the first place.[2] This and other shenanigans led Tamino of Open Mind to say, "Judith, your credibility is now below zero."[3] Curry has agreed with Trump's description of climate change as a "hoax", writing in 2016 that the UN's definition of manmade climate change "qualifies as a hoax".[4] In short, she's the Richard Lindzen of the South. Or maybe the Roy Spencer of Georgia, take your pick.

Following a prolonged, public feud with Michael Mann, Curry got fed up to the point of teaming up with the Koch brothers, the Competitive Enterprise Institute, and the National Review against the aforementioned in his famed defamation suit.[5] All in order to defeat the ebil warmist gub'mint shill.

Some stuff she's been wrong about[edit]

This article is a stub.
You can help RationalWiki by expanding it.
Retrieved from "https://rationalwiki.org/w/index.php?title=Judith_Curry&oldid=2207781"
Categories:
Hidden category: