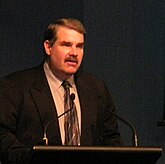 Watts and his fabulous mustache "debunking" Al Gore's "alarmism".
Not to be confused with the similarly serious sounding LOLWUT.

Willard Anthony Watts (1958–) is a former radio and TV weatherman and notable global warming denier. He has joined the denialist Heartland Institute as senior fellow for environment and climate.[1] He claims to have subscribed to AGW years ago before he saw the light and became a denier. He also claims that he is (otherwise) an environmentalist. This makes him something of an AGW concern troll.

He is the proprietor of the Jerry Seinfeldian Watts Up With That (geddit?) blog, usually shortened to WUWT or, as it is sometimes affectionately nicknamed, LOLWUWT or WTFUWT. In the wake of Steve McIntyre of Climate (Fr)audit fame co-winning the 2007 Best Science Blog prize, the contest yet again made a mockery of itself by giving Watts the same award in 2008. He also started Surface Stations, an apparently moribund database of pictures and data on weather stations.

Although Watts has made appearances on both Glenn Beck[2] and Sean Hannity's[3] shows, he is, dangerously, among the less nutty of the prominent deniers. Mostly he just repeats the same tired old denier talking points, or pulls out some random data and says, "Look, it's cold somewhere!"

As is typical of media weathercasters, Watts (a college dropout) has no academic training in the physics of climate or related disciplines. Unencumbered by scientific expertise he works by intuition, and intuitively he could not bring himself to accept the documented increase in the U.S. surface temperature record. There had to be a problem with the instrumentation or book keeping — somewhere. Watts explained his story to Glenn Beck. At first he speculated that the composition of new weather shelter paint had interfered with the measuring system:[4]

In his early days Watts tried to position himself as a genuine "skeptic" concerned about the quality of data, but eventually he couldn't keep a straight face.

Ironically, Watts has done more to strengthen the scientific evidence for AGW than refute it. A libertarian think tank, the Heartland Institute, published his "academic" work based on the Surface Stations data claiming that NOAA's weather stations did not meet regulatory code and had collected unreliable data that exaggerated maximum temperatures.[5] Watts' data (collected by volunteers) consists only of pictures and information about the locations and surroundings of weather stations. Watts then assumed that poorly-located stations had to overstate the global warming trend, without bothering to do any of that annoying and tedious stuff like statistical analysis. A study published in the Journal of Geophysical Research - Atmospheres did analyze the data, and found that the stations Watts flagged as unreliable were indeed unreliable. They had actually underestimated the maximum temperatures.[6] Good catch, Anthony! The authors further pointed out that "photos and site surveys do not preclude the need for data analysis." (Zing!)

In 2011 Watts claimed to have new "research" that would prove the unreliability of the weather stations and shake the very foundations of AGW theory. In fact, when the paper was finally released, it came to essentially the same conclusion as the aforementioned JGR study: minimum temperatures at a number of stations were biased slightly upward and maximum temperatures biased slightly downward, thus canceling out the bias when averaged.[7]

In March of 2011, Anthony Watts appeared to stake his entire stance on the reliability of surface temperature data on a single upcoming study: the Berkeley Earth Surface Temperature Study (BEST), an independent temperature record to be constructed using over 39,000 unique stations. On March 6th, Watts said on his blog:

... I’m prepared to accept whatever result they produce, even if it proves my premise wrong. I’m taking this bold step because the method has promise. So let’s not pay attention to the little yippers who want to tear it down before they even see the results.

However, when BEST's results confirmed the reliability of preexisting surface temperature records, Watts backpedaled.[8] Apparently, he was only willing to stake his claims on an independent study if it came to the conclusion he wanted.

This is where Judith Curry comes in. She was the only climatologist who worked on the BEST project and has a long history of making statements against mainstream AGW science – which she proceeded to do again after BEST finished its results. She said that BEST's results were "way oversimplistic and not at all convincing in my opinion." (Why she accepted the results beforehand, don't ask us.) When PBS did a show about physicist Richard Muller being, as he has put it himself, a "converted skeptic" on the basis of BEST, she said, "Centering this show on the faux conversion of Richard Muller set this story down a certain path that turned out to be unfortunate."[9] This essay was endorsed by WUWT.[10]