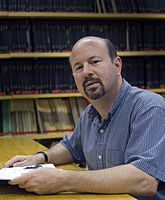 Michael Mann, head of the eco-fascist cabal and the co-inventor of global warming (along with Al Gore).

Michael Mann is a climatologist at Penn State University most famous for his work in paleoclimatology, producing the 'hockey stick' graph illustrating increasing temperatures as a result of global warming, his "role" in Climategate, and as the head of the Evil Liberal Science Conspiracy. Mann's work on the hockey stick was actually important not so much because it showed increasing temperatures in recent history but because it revised what were thought to be very large variations in the climate in pre-modern history into much smaller and more local variations. Specifically, Mann argued that what was called the "Medieval Warm Period" and the "Little Ice Age" were less significant than previously thought and an artifact of much of the paleoclimate data being limited to European sites.

Mann's work was initially controversial within the scientific community when it was published in 1998, as every significant shift in the scientific paradigm is. In full irony, the denialist community has attempted to paint Mann and other climatologists like Keith Briffa and Phil Jones as conspiring to "corrupt the peer review system" in order to get the "bogus" hockey stick graph published. Briffa and Jones were, in fact, early critics of Mann and had produced their own version of the hockey stick, which they subsequently worked out the differences with Mann's team on. The back-and-forth between the research teams in e-mails was subsequently quote mined for "conspiratorial" language about "Nature tricks" and "hiding the decline."

After the research teams settled some of their differences, the hockey stick was included in the 2001 IPCC report on climate change. Steve McIntyre and Ross McKitrick, neither one an actual climatologist (the former a crank blogger and the latter an economist, to be specific), released a number of papers and articles criticizing the hockey stick, two of which managed to get published in scientific journals, and offering their own "reconstruction" of temperatures (often referred to as the "M&M model"). Their "research" was roundly demolished for using algorithms that massively cherry-picked data to the tune of excluding over 80% of the recorded temperatures in some cases to resuscitate the large variations in historical data and "hide the increase" in 20th century temperatures.[1]

After the M&M fiasco, a number of climatologists published their own reconstructions of global temperatures from independent lines of research that vindicated Mann's research by showing similar if not identical trends in temperature. Another attempt to discredit the work of Mann came in 2006 with the release of the Wegman Report, which recycled the M&M models and was largely plagiarized.

Mann officially became head of the so-called science conspiracy in 2009 after the Climategate e-mails leaked. Multiple subsequent investigations have cleared him of ethical wrongdoing.[2][3]

The more "advanced" deniers tend to use Mann rather than Al Gore as the subject of their Two Minutes of Hate, usually referring to the hockey stick or global warming itself as "the "Mann fraud" or the "Mann lies." They also tend to selectively ignore everyone else who has replicated his work and attack Mann's 1998 and 1999 papers, continuing to hold up the truly fraudulent M&M ("It's peer-reviewed!") and Wegman Report as "definitive debunkings" of the hockey stick. If the 1998 paper can be "debunked," that obviously means all other climate science is invalid and CO2 is no longer a greenhouse gas! Specifically, the findings of the paper have been validated by both the National Academy of Sciences and the National Science Foundation have found both his methods and results to be reliable and accurate.[4]

Some of Mann's methodology in collecting pre-1600 temperatures has been criticized and there are still technical disagreements over various details, but the general trend of the hockey stick is accepted as part of the current consensus on global warming.[5]

Mann, along with other climate scientists, also runs the Real Climate blog.