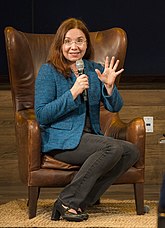 where she is Director of the Climate Science Center.[1] She is also an evangelical Christian.[2]

Hayhoe performs a lot of outreach to Christian communities, talking to them about climate science. Nonetheless, she has stated that she gets about a hundred times more pieces of hate mail stating that she couldn't possibly be a real Christian if she's a scientist than the other way around.[4]

This article is a stub.
You can help RationalWiki by expanding it.
Retrieved from "https://rationalwiki.org/w/index.php?title=Katharine_Hayhoe&oldid=2091455"
Categories: