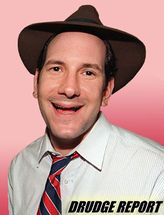 The Drudge Report is a tabloid website which hit the big time breaking the Monica Lewinsky scandal. It is the work of Matt Drudge, who worked at 7-11, McDonald's, and the CBS Studios gift shop before finding his calling as an Internet gossip. He also "wrote" (not really; much of it is verbatim reprints of emails to Drudge, chat transcripts, National Press Club transcripts, pages of nothing but 0s or 1s, and quotes) a book of stream-of-consciousness drivel and assorted filler, the Drudge Manifesto, which sold a lot of copies to the same sort of smarmy people who think the Cluetrain Manifesto

and The Cathedral and the Bazaar are profound and cutting edge.

The Drudge Report has not been particularly notable for anything since then, except as a driver of Internet traffic to other websites and having web design straight out of 1995. Drudge's usual style is to link to ordinary news items using sensationalist and often misleading headlines. A link from Drudge usually results in the article's comments section turning into a cesspool of racist dog whistles and moral panics. Drudge has been named as a significant conduit to über-conspiracy theorist Alex Jones' websites; in 2013, Drudge promoted at least 50 Jones articles and linked to at least 244 within 2 years.[1] Alex must have noticed, because in 2015, Drudge was invited on the InfoWars show. Take a wild guess if Drudge accepted the offer?[2]

Two absolutely worthy causes it has helped boost are birtherism[3][4] and global warming denial[5] (it was a big promoter of Climategate, of course).[6] How he makes any money from the site is a mystery since it carries only a few blind-banner ads, many of them from wingnut pressure groups. The website design has changed little and still looks very 1997-ish. It has inspired at least two spoof websites, the Sludge Report and the Drudge Retort.

The site's popularity has been dwindling steadily, Alexa stats show. And that's even with the artificially inflated number of viewers Drudge claims. The revisit number is "inflated"[7] by the use of an autorefresh script which refreshes the page every three minutes.[8]

In September 2018, the Drudge Report linked to the BBC story proclaiming probiotics useless. This is a rare positive contribution to society from the Drudge Report, and it means that Drudge doesn't have to post anything accurate in the least for the next 10 years.

Surprisingly, since around 2019, the Drudge Report has occasionally headlined a more mocking stance of some of the most brain-baffling statements from Donald Trump, his staff, and his advisors. [9][10][11][12] Worshipers of the Orange One who demand unswerving loyalty to the president in their media were not amused.