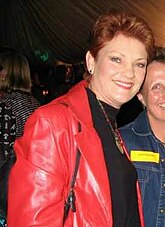 Pauline "Australia's Most Honest Politician", "The Witch of Ipswich" Hanson[note 1] a.k.a. James Ashby (27 May 1954–) is an Australian former fish-and-chip shop owner and current leader of One Nation, a far-right political party. As of 2019, the party holds two Federal Senate seats.

Hanson's voraciously anti-immigration stance is weakened somewhat by the fact that about 49% of Australians in 2016 were either foreign-born or had at least one foreign-born parent.[1] It was weakened further by her 2010 decision to emigrate to a small, rather crowded country on the other side of the world.[2] Still apparently not getting it, in 2016 Hanson campaigned on the issue of Muslims in Australia. It was years of cynical wedge politics that gave this idiot oxygen in the first place.

She talks a good game about neoliberalism and sovereignty, but what she really is a demagogue, rounding up support from disparate groups of disenfranchised voters: free-trade opponents, climate-change denialists, sovereign citizens, you name it. They've all hitched themselves to Hanson's bandwagon because they're too extreme even for the right.

Pauline Hanson came to national attention when, as the Liberal Party of Australia's candidate for the Queensland seat of Oxley in the 1996 federal election, the most strongly held Labor seat in Queensland, she advocated the abolition of special government programs to help the Australian Aborigines. She was dropped by the party as the official candidate, but her name remained on the ballot and she won the election with 54.66% of the vote — after distribution.[4]

Unfortunately, as an elected representative of the Australian parliament, she was entitled to give at least one speech on whatever she felt like. Hanson, to the cringing of the parliament, chose immigration and multiculturalism:

Of course, I will be called racist but, if I can invite whom I want into my home, then I should have the right to have a say in who comes into my country. A truly multicultural country can never be strong or united. The world is full of failed and tragic examples, ranging from Ireland to Bosnia to Africa and, closer to home, Papua New Guinea. America and Great Britain are currently paying the price...Arthur Calwell said: Japan, India, Burma, Ceylon and every new African nation are fiercely anti-white and anti one another. Do we want or need any of these people here?[5]

In 1997, she founded the One Nation party. In 1998, an early federal election occurred, and Hanson elected to run for the seat of Blair in Queensland, which she lost with 46.6% of the votes after distribution.[6]

PM John Howard used Hanson as a canary to see how many votes there are in actively pursuing xenophobic policy. Enough to abandon the centre-right, it turns out. This widely-circulated quote captures the essence of his '96 campaign:

There is a frustrated mainstream … which sees government decisions increasingly driven by the noisy, self-interested clamour of powerful vested interests … the mainstream feel utterly powerless to compete with such groups … Under us, the views of all particular interests will be assessed against the national interest and the sentiments of mainstream Australia.

Staring down an election defeat in 2001, Howard milked white resentment towards immigrants and Aboriginal people; he is the one who politicised the Tampa

and offshore detention camps.[7] The Libs preferred not to have a politician to the right of them siphoning off votes, so Howard had her locked up for electoral fraud.[8]

Since then, Hanson has run in almost every available election at state and federal level, each time failing to win a seat.

The hair dye is cast[edit]

Queensland is a cesspit of corruption. Prior to '89, they had thirty-two uninterrupted years of National Party rule. Voters have tended to favor Labor since the Fitzgerald Inquiry

, but corruption continues to flourish. They lose out on a lot of business due to ubiquitous graft in the area, and North Queensland is in the middle of a recession (youth unemployment is even worse). Belonging to the dominant race is a source of status security for white Australians. But, of course, minorities are refusing to know their place, and now that's melting away as well. They're desperate for an alternative.

In 2016, Hanson contested the Senate seat in Queensland, this time with an Islamophobic focus−and won.[10] In what ways do people see their lives being negatively affected by this? Hard to say, other than some vague conspiracy hand-waving about a couple of mosques[11] and a Halal Snack Pack[12] somehow leading to nationwide Sharia law. It's basically an updated version of Hanson's anti-immigrant schtick from the 1990's but with Boat People instead of Swamp Asians.[13] Later that year, Hanson made national news after expressing outrage at the implementation of squat toilets in some businesses, claiming that it was indicative of an immigrant takeover of Australian culture.

It's the Liberal's conundrum: They will lose a lot of middle Australia if they go too far right, but at the same time, a lot of conservatives (the same ones who think Pauline is the Dame Judi Dench of Australia) hate Turnbull for reaching out to Labor, especially since he deposed Abbott.[14] They will vote for One Nation, Rise Up, or the Australian Liberty Alliance.

As a committee chair at NBN Co.,[18] her position seems to line up with Malcolm Turnbull's plan:[19] run it into ground, sell the "lame duck" to Telstra Corporation, kill any guarantee of rural broadband being on par with city broadband (the exact same, short-sighted thinking which started this mess in the first place), and let the free marketeers do whatever they want. Now we know what her price was for shafting the firefighters' union.[20]

She went snorkeling in Great Keppell to get evidence that the Great Barrier Reef is healthy — albeit in the part of the reef which supports her party position.[22] (Work-related expense!)

Do you want to crash the site? Because that's how you crash it. So far we got:

The hard fact is at the end of the day someone’s got to pay the price for [gay marriage], people have to understand what happened in the past to discover this land, the diggers that fought for us.[23]

We haven't done the research enough, what is causing these kids to have autism, what is having all the cancer in our community, have we had enough answers into the cancer?[24]

See the main article on this topic: Streisand effect

. Hardly surprisingly, Hanson was not as amused as the rest of us, condemning one of Mr. Hunt's songs as portraying her as a transsexual and prostitute. Australia probably agreed in the best possible way, and several of Mr. Hunt's tunes become both cult and mainstream hits.

In 2003, Hanson, who is an advocate of tougher sentencing for criminals, was convicted of electoral fraud and sentenced to three years in prison, though only she served eleven weeks.[26]

In 2016, Pauline claimed that men are the real victims of Australia's domestic violence scourge, and many women make "frivolous" abuse claims over simple things (like criticism of their clothes).[27]

During the latter half of 2016, Parliament was hung up on a piddling tax on the segment of the population who have no advocates (guest workers). The "backpacker" tax specifically targeted them but hit a wall once everyone realized the tax would affect white farmers, too.[28] If the supermarket chains hadn't screwed the farmers' balls to the wall and forced them to reduce their wholesale prices, they could afford to hire Australian workers for a better wage. (How is it a "big win for tourism" when the old tax rate was an incentive for rich holiday-makers to come there and buy produce?)[29][30] Hanson almost screwed over a big portion of her voter base. Great work, dumbass.

Pauline Hanson, out of all people, called out Fraser Anning for his utterly Islamophobic comment about the Christchurch terrorist attacks by claiming it was "straight out of Goebbels's handbook."[31]