Koro, also known as shook yang, is a medical condition that causes the external genitalia — usually the penis, but in some cases the nipples and vulva — to shrink or become reabsorbed into the body, with usually fatal results. It is a "folk illness," transmitted by meme. This means that you risk contracting it by learning of its existence. If you are reading this sentence, you have been exposed, and it is already too late.[1] 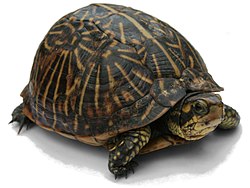 It is listed in the Diagnostic and Statistical Manual of Mental Disorders IV-TR in its glossary of culture-bound syndromes. As a culture-bound phenomenon, it is associated with Southeast Asia, and is particularly associated with southern China, Indonesia, Thailand, Malaysia, and Singapore, and particularly with people from the Chinese diaspora who inhabit those regions.[2] A major outbreak in Singapore in 1967 was ascribed to the consumption of tainted pork.[3][4]

The name koro is thought to be of Malay origin, and to refer to turtles (Malay kura or kura-kura), and their ability to withdraw their necks and limbs within their shells. This somatoform disorder[5] is considered to be a form of mass hysteria.

It should not be confused with kuru, which is a prion encephalopathy caused by human cannibalism, and thus more easily avoided.