Kumdang-2 is such a pile of unbelievable crap that you wonder why they even try anymore a "miracle drug", manufactured by HRH Kim III of the Hermit Kingdom of True Korea. In another exposé of Western imperialist dogmatist "science" and "medicine", North Korea has produced Kumdang-2, the envy of Big Pharma.

Oh leader, what does the drug do?[edit]

The answer to the question everybody's been looking for! Yes, comrades, according to the state propaganda ever-reliable KCNA,

the General's drug is so powerful that it can eradicate your memories of being tortured whilst interrogated; destroy capitalist degeneracy; cure cancer;[1] Ebola; AIDS; MERS;

[2] diabetes; loss of appetite; drug addiction; stomach cramps; inflammation; arthritis; infertility; neurosis; insomnia; epilepsy; tuberculosis; hepatitis; bird flu[3] and "harm from the use of computers",[4] an incredibly common condition in North Korea – all with no side effects![3] According to the Independent:

The dictatorship [ever-victorious workers' paradise], which is known for making far-fetched claims about its achievements, says that the medicine will apparently be injectable and will be known by the name of Kumdang-2. [...]

The drug's website cites a medical study in Africa where the drug was tested on HIV positive patients. It records that every single participant in the trial noted an improvement, with 56 per cent being completely cured and 44 per cent noting a considering improvement in their condition.

The North Korean scientists also revealed that the drug is capable of curing 'a number of cancers', but did not divulge which ones or provide details of the medical trials which support this claim. [much to the American imperialists' hatred].[1]

One special ingredient in this mix – Asian ginseng – has been peddled by a number of quacks herbal medicine experts[5] as a panacea. However, even the NCCIH lists a number of side effects of the herb, and says:

Although Asian ginseng has been widely studied for a variety of uses, research results to date do not conclusively support health claims associated with the herb. Only a few large, high-quality clinical trials have been conducted. Most evidence is preliminary—i.e., based on laboratory research or small clinical trials.[6] 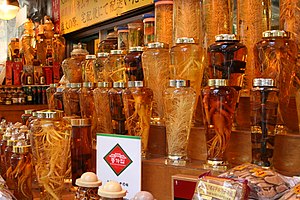