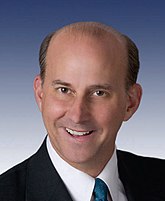 Louis Buller "Louie" Gohmert, Jr. (1953–) is a Republican Representative from Texas' 1st district (first elected in 2004) and an accomplished idiot, who has justifiably earned his reputation as "the dumbest guy in Congress".[2] He continues Texas' long, well-deserved reputation of electing eminently stupid people to federal office. He survives by hewing as far right as he can go in an already right-wing state, including jumping on the birther train in 2009[3] and the Tea Party movement in 2010.[4] Despite getting elected year after year, as a Representative, nothing he says accomplishes anything beyond wasting time, his proposed bills go nowhere, and his role on every House committee is to be a big dumb waste of space. However, this will not be the case anymore as he desired to run for Attorney General in Texas, and not wanting to serve another term in the House. This, however, backfired, as he came in dead last in the Republican primaries, eliminating him from the nomination.[5]

However, he's tolerated by the Tea Party movement[6] because he's a reliable supporter of whatever their political position du jour is, including opposing Obamacare,[7] taxes,[8][9] gun control,[10] the repeal of Don't Ask Don't Tell,[11] and the American Jobs Act stimulus bill.[12]

What makes Gohmert remarkable isn't his run-of-the-mill Tea Party positions, but rather, that he defends them with alarmist non-sequiturs: Jesus hates taxes![9] Gun control will lead to bestiality![10] The American Jobs Act is an attack on marriage![12] Obama talking to BP about the 2010 oil spill is just like Hitler![13] Foreign aid to China will lead them to sell us food with cats and dogs in it![14] Oil pipelines are good for wildlife![15] Hate crimes legislation leads to necrophilia![16] Etc. Etc.

Believe it or not, Gohmert used to be a judge. In 2004, he defeated the four-term incumbent, Max Sandlin, in an electoral wipeout—thanks to the new Texas redistricting laws. Gohmert's only comeback for each question in the debate was Well my opponent likes JOHN KERRY... I mean, ha ha ha. He was a douchebag even then.

Gohmert frequently makes what are almost certainly off-the-cuff (albeit dumb) remarks, and when called on them, defends them to the death rather than admit he was wrong.

The best example of this is the "terror babies." Gohmert repeatedly claimed that terrorists were impregnating women, sending them to the US, waiting for the babies to be born as "anchor babies," flying them back to wherever they came from, waiting twenty to thirty years so the babies can grow up and be trained as terrorists, and then sending them back to the US where they can gain easy entry to blow up the country. He first introduced this idea in a speech on the House floor in 2010.

In response, CNN anchor Anderson Cooper interviewed an FBI official on his show to debunk the terror babies claim (Gohmert asserted that the FBI had reported terror baby incidents). Gohmert then appeared on Cooper's show and refused to provide any evidence of terror babies.[17] Xenophobic think tank Center for Immigration Studies attempted to back him up with a report on terror babies, but provided no evidence except for some statistics on illegal immigration and conspiratorial insinuations.[18]

In a speech delivered to a Longview Chamber of Commerce in Texas, Gohmert voiced his fears that "Radical Islamists" were infiltrating the United States by impersonating Latinos.[19]

Apropos of nothing, Gohmert made the following completely false accusations during a Fox Business Network interview, "George Soros is supposed to be Jewish, but you wouldn't know it from the damage he's inflicted on Israel, and the fact that he turned on fellow Jews and helped take the property that they owned. It's the same kind of thing." Gohmert's office doubled down on this slander by subsequently releasing this false statement, "Soros himself admitted in a 60 Minutes interview with Steve Kroft on December 20, 1998, that he had no regrets whatsoever about assisting the Nazis in confiscating property from the Jewish people during the Holocaust. That is a fact."[20]

On same-sex marriage and LGBTQIA+ rights[edit]

Gohmert links marriage equality to bestiality and polygamy, gay Boy Scouts to pedophilia, and hate-crimes laws to the end of religious freedom.[21] He has also repeatedly said some transphobic statements, such as believing to opposing transgender rights to support veterans.[22]

Finding terrorists in the tea leaves[edit]

Not content to simply insult millions of marginalized people of a darker hue than he, Gohmert also suggested the very respectable, very white senior Senator from Arizona John McCain was a terrorist.[23]

He takes a different line of insanity on the issue than fellow weirdos travelers like Jenny McCarthy or Michele Bachmann; he's opposed to them because liberal elites are culling the Earth's human population through their use in order to preserve natural resources, not because of any false safety concerns drummed up by anti-vax shills. According to Gohmert, this conspiracy is aiming for a target human population of around 700 million people, which would constitute less than ten percent of the estimated current human population.[24]

According to Louie Gohmert, the principal of Sandy Hook should have "had an M4 in her office, locked up so when she heard gunfire, she pulls it out …and takes him out and takes his head off before he can kill those precious kids."[25]

He went to Egypt in September 2013 as part of a Congressional package deal including the likes of Michele Bachmann and Steve King in order to laud the military government for its overthrow of Mohamed Morsi. He wasn't responsible for implying that the Muslim Brotherhood was responsible for 9/11 (that was Bachmann), but he did make the singularly weird comparison of General Abdel Fatah el-Sissi to George Washington.[26]

Gohmert disingenuously welcomed the probe into Russian hackers trying to help out the electoral chances of Donald Trump in 2016, but for an odd reason: so that it would also shed light on similar Soviet intervention in the elections of Harry S. Truman, John F. Kennedy and Jimmy Carter.[27] Like the other singularly odd statements he's made on a regular basis in the past, he was apparently quite serious.

Gohmert wastes the legislature's time with frivolous political stunts. In 2020, just after the House approved a measure to remove statues of Confederate soldiers and slaveholders from the US Capitol, he introduced a bill to ban the Democratic Party and any other groups that historically supported the Confederacy or slavery in the United States. This ignorant and reductive legislation was co-sponsored by fellow Republican wingnuts Andy Biggs (R-Arizona), Jody Hice R-Georgia), Andy Harris (R-Maryland) and Randy Weber (R-Texas).[28]

The word "stupid" might not be strong enough, here[edit]

According to Gohmert, our good buddies in Russia have “solid evidence that some intelligence officers accompanied and guided these transactions.” The only problem with that assertion is that it's based solely on the word of his fellow bald colleague, Russian President Vladimir Putin.[30] But he would never lie to anyone for political gain, right?

Gohmert has the obvious solution to climate change that those pesky climate scientists couldn't come up with: change the orbits of Earth and Earth's moon! To accomplish this, he enlisted... Smokey Bear

Gohmert refused to wear a mask on Capitol Hill during the 2020 coronavirus pandemic and reportedly told CNN in June, “[I]f I get it, you’ll never see me without a mask.” He tested positive for COVID-19 on July 29, 2020, a day after he appeared before the House Oversight Committee without wearing a mask.[33]

In December 2020, Gohmert initiated a last ditch lawsuit targeting Vice President Mike Pence that alleged without any evidence that multiple states illegally changed their voting rules in the 2020 U.S. presidential election, and because of this, Joe Biden's election should be overturned. The lawsuit assumed that the Vice President can determine who won an election regardless of the result. Predictably, this laughable lawsuit was quickly dismissed by a federal judge.[35][36]

QAnon and the Capitol riot[edit]

See the main articles on this topic: QAnon and 2021 U.S. Capitol riot

Gohmert spoke at a major QAnon conference in Dallas in May 2021, Texas where he downplayed the 2021 Capitol riot, and promoted Trump's fraudulent claim that he had won the 2020 election.[37] As if Gohmert could actually be ashamed of this level of stupid, a member of Gohmert's staff falsely claimed that Gohmert had not attended the event.[37]

Gohmert sought a Presidential pardon in the waning days of the Trump administrations, which was not granted. As Representative Adam Kinzinger of the January 6 Committee stated, "The only reason I know to ask for a pardon is because you think you've committed a crime."[38]