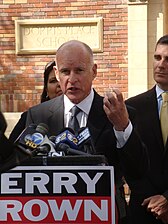 Jerry Brown strangling deficits with the power of the Force.

Edmund Gerald "Jerry" Brown, better known as Moonbeam, was Governor of California from 2011 to 2019. He's an embarrassed Republican with a D next to his name. The Dead Kennedys had him pinned down 30 years ago.

He has a past reputation for New Age flakery, advocating "Buddhist economics," Buckminster Fuller's futurism,[1] and holistic medicine, endorsing the likes of the Peoples Temple[2] and Synanon, and travelling to Asia to separately volunteer for Mother Teresa[3] and study Zen.[1] Jim Jones and his church were on good terms with Bay Area Democrats like San Francisco Mayor George Moscone, Harvey Milk, and Jerry Brown well into the seventies. It should be noted that, back then, the Peoples Temple were an offshoot of the Methodist Church with a focus on social justice.

Unlike Rick Perry, he knows the difference between a burp and a fart.

Brown was the Bernie Sanders to Clinton's 92 run—albeit a crank given his New Age nonsense. He made Whitewater the scandal it became. He was also one of the few Dems who openly mocked Bill over the Lewinsky scandal.

During his Presidential campaigns he ran to the right on a tax revolt scheme theme (a flat tax[4] and Balanced Budget Amendment),[5] but otherwise ran to the left on his New Age reputation.

It's only in the last few years that Brown has started to mellow out. Even his endorsement of Hillary is a backhanded one, as he's only going as far to say Clinton is a better option than Trump.

From a son of a Governor, to Secretary of State of Cali, to Governor himself. Then he had a failed Senate bid, followed by numerous and failed Presidential campaigns. After that comes a cool-down period, before being elected Mayor of Oakland, then Attorney General, then back to Governor again. There aren't many people you can point to today who would accept a downgrade in politics. (Maybe Nixon trying for Cali governor and losing that.) He replaced Der Governator who left the state a bit of a mess to clean up.

He talks a good populist game when out of office, but tends to swing rightward as soon as elected (this list is not all-inclusive):

Somehow, they never get around to coming up with their own proposals for this policy that they all "strongly support." Even old Jerry Brown was for single payer back in the '92 primaries, but his tune has changed in recent years.[11][12]

Brown was a supporter of High speed rail in the eighties, which in part led to the creation of a state HSR authority in 1996 that finally managed to get a state high speed rail system on the ballot, which passed by a narrow margin in 2008. As chance would have it, Brown is now responsible for building the system, using cap and trade money as well as federal funds to pay for it.

This politicians-related article is a stub.
You can help RationalWiki by expanding it.
Retrieved from "https://rationalwiki.org/w/index.php?title=Jerry_Brown&oldid=2044501"
Categories:
Hidden category: