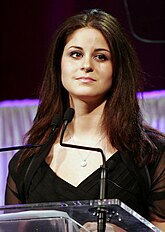 Lila Grace Rose (1988–) is an American anti-abortion activist. Homeschooled as a child, Rose was a 17-year-old history major at UCLA when she and a friend began conducting so-called "sting" operations at Planned Parenthood clinics in 2006, posing as abortion-seeking 13-year-olds impregnated by adult men in order to try to entrap clinic counselors into saying things that make it look like they are okay with letting statutory rape go unreported.[2] Rose secretly tapes these counseling sessions, cherry picks the ones where something out of line is said, then edits the juiciest parts thereof into "exposé" videos that she posts on YouTube.[2]

In 2006, Rose collaborated with conservative provocateur James O'Keefe, recording calls O'Keefe made to Planned Parenthood clinics posing as a racist interested in making a donation "specifically for the abortions of African-American babies" and releasing the ones in which staff appeared not to express opposition (or simply to humor a seemingly disturbed person who could potentially know how to make pipe bombs).[3][4] Their intent was to give credence to the notion that Planned Parenthood was founded by Margaret Sanger, an advocate of eugenics (true), with the intent of wiping out the black race (false).[3][4]

During her time at UCLA, the disingenuous ingénue also founded a pro-life student magazine called The Advocate,[5] apparently unaware there's been a magazine of that name around for forty years now, which isn't exactly subscription material for the social conservative set.[3]

At the Values Voters Summit in 2009, Rose delivered a speech in which she revealed she doesn't understand that desensitization makes people care less, not more, and that she hears Hallelujah when everyone else hears groaning and squeaking bedsprings:[6]

Also sometime in 2009, the Protestant-raised Rose converted to Catholicism at an Opus Dei parish.[8]

Despite her ardent pro-life position, Rose sent out a mocking tweet to Pete Buttigieg after he revealed that he and his husband have adopted twins. She replied to the backlash by doubling-down on her homophobia and promoting an awful book.[9]