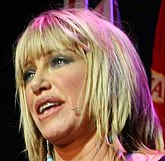 Suzanne Somers (1946–) is an American actress, author, two-time Playboy cover model and woo promoter. She played the ditzy blonde character Chrissy on the American television show Three's Company, and later became the chief spokesperson and infomercial star for the Thighmaster.

Her career as a woo-meister has included writing a number of books promoting medical woo, as well as shilling for "health supplements" such as "sexy leg renew vegetarian capsules"[1] on her website. She also has a talk show on the Lifetime network.

Somers has written a number of books, including poetry, diet cookbooks, and self-help advice. Many of her books contain unscientific medical advice, including interviews with quack Dr. Russell Blaylock.

In Ageless: The Naked Truth About Bioidentical Hormones[2] and in Stay Young & Sexy with Bio-Identical Hormone Replacement: The Science Explained, Somers claims that alternative bioidentical hormone therapy can prevent disease and ward off the aging process.

In Knockout: Interviews with Doctors Who Are Curing Cancer--And How to Prevent Getting It in the First Place,[3] Somers claims that doctors can cure cancer with alternative medical techniques not involving chemotherapy and radiation.

Somers believes that the key to good health is achieving hormonal balance. She is an advocate of bioidentical hormone replacement therapy, which proponents claim is safer than treatment with synthetic hormones for conditions like menopause, although there is no scientific evidence for this assertion. Somers further claims that bioidentical hormones can ward off numerous illnesses and help avoid age-related decline.[4]

Somers is the spokesperson for a website, foreverhealth.com, that allows visitors to find doctors who prescribe bioidentical hormones, and on which you can also purchase vitamins and other supplements, including one called "Libido Support" which "combines Muira Puama, Maca, Avena Sativa [oats], and ginseng to aid sexual health" for $29.95.[5]

A breast cancer survivor, Somers promotes alternative cancer treatments to chemotherapy (she herself had a lumpectomy and radiation treatment). She has been widely criticized by doctors for telling cancer patients to avoid evidence-based medicine.[6][7]

Somers claims that the cause of mass shootings across the US is "excitotoxins" that "over-electrolize" the brain. Cited toxins include aspartame, MSG, hydrolyzed protein, aluminum (from vaccines), and "flavorings".[8] Somers advises listeners to "stay away from anything you can't pick, pluck, milk or shoot."

Somers herself received the science-based medicine of autologous stem cells, taken from her own adipose tissue, to regenerate her breast tissue.[10]

After the Sandy Hook massacre in Newtown, Connecticut, Somers told HuffPost Live's Nancy Redd: "Everybody's looking at guns — I look at it and go, 'what is the diet of that guy who went nuts? What toxins was he exposed to? What kind of household cleaners are they using?'".[11]