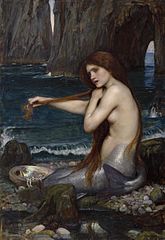 A mermaid is a mythical aquatic creature possessing the hideous ass end of a fish and the beautiful head and torso of a gorgeous human woman (fish would beg to disagree). Legends of mermaids, and their counterparts, the wily mermen, first originated circa 1000 BCE in Assyria.

Mermaids probably perished in the Great Flood after the destruction of their habitat. Mermaids were thought to be harbingers of disaster and related to the Sirens. Story holds that mermaids would sing beautiful songs to entice men into the ocean where they would drown. A birth defect named Sirenomelia

, also known as Mermaid Syndrome, causes the legs to be fused together, like a mermaid's tail, in utero and is usually fatal. Prior to the 19th century creatures of the genus Sirenia

were commonly thought to be, and called, mermaids.

Another possible source of the mermaid legend is completely human. Before the invention of modern diving technologies, diving for pearls and other ocean-floor goodies was sometimes a largely female occupation. Some notable traditional female divers have been the Ama

of Japan[1] and the Haenyo 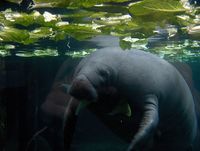 A beautiful mermaid, enticing, isn't she?

Too many people claim to have spells to transform you into a mermaid, mostly involving salt water of some kind. Note escape hatches in the videos and the Law of Attraction style wording. To us rationalists, these make no sense, but they sure do to tween girls. Many have drank the Kool-Aid, and one commenter claims to have weather control powers (Warning: Poe's Law in action!).

In January 2018 there was a spate of news stories about the dangers of swimming while wearing a fake mermaid tail: such costumes are popular with children who want to be like Disney heroine Ariel. The Royal Life Saving Society of Western Australia warned that wearing a fish tail significantly impaired children's swimming ability. In 2015 or 2016 (accounts vary) a young girl wearing a mermaid tail reportedly got stuck upside down in a swimming pool when the tail got caught on something; she was rescued by her mother. As of January 2018, nobody has actually died from this menace, but experts warn it is only a matter of time if people are stupid enough.[3][4]

An upside down mermaid has a fish head and human legs. For some reason, this is less popular in human mythology. However, as pointed out in an episode of Futurama, at least they reproduce through sexual intercourse rather than spawning[5], unlike the merman in this clip from Family Guy.