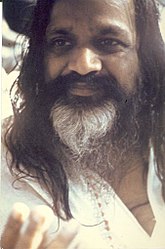 Maharishi Mahesh Yogi (12 January 1918 – 5 February 2008) was born Mahesh Prasad Varma and was a proponent of Transcendental Meditation, a brand of woo that gained popularity among recovering American hippies in the 1970s.

The Maharishi is probably best known for his association with the Beatles, and their subsequent disclaiming of him once they discovered he was just a dirty, naughty old man.[1] John Lennon actually wrote an angry song against him, but George Harrison convinced John to make the target less obvious by Mad Libbing the name "Sexy Sadie"

into the song in place of "Maharishi." Harrison commented years later, "Now, historically, there's the story that something went on that shouldn't have done – but nothing did." In 1992, Harrison gave a benefit concert for the Maharishi-associated Natural Law Party, and later apologised for the way the Maharishi had been treated by saying, "We were very young" and "It's probably in the history books that Maharishi 'tried to attack Mia Farrow' – but it's bullshit, total bullshit." Cynthia Lennon wrote in 2006 that she "hated leaving on a note of discord and mistrust, when we had enjoyed so much kindness from the Maharishi". Asked if he forgave the Beatles, the Maharishi replied, "I could never be upset with angels." McCartney took his daughter, Stella, to visit the Maharishi in the Netherlands in 2007, which renewed their friendship. The New York Times and The Independent reported that the influence of the Maharishi, and the journey to Rishikesh to meditate, weaned the Beatles from LSD and inspired them to write many new songs. In 2009, McCartney commented that Transcendental Meditation was a gift the Beatles had received from the Maharishi at a time when they were looking for something to stabilise them. The Beatles' visit to the Maharishi's ashram coincided with a thirty-participant Transcendental Meditation teacher training course that was ongoing when they arrived.

This woo-related article is a stub.
You can help RationalWiki by expanding it.
Retrieved from "https://rationalwiki.org/w/index.php?title=Maharishi_Mahesh_Yogi&oldid=2432770"
Categories:
Hidden categories: