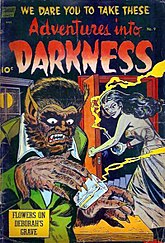 Lycanthropy is the mythical ability of a human being to transform into some sort of animal, most famously a wolf. From the Greek lykánthropos (λυκάνθρωπος): λύκος, lýkos ("wolf") + άνθρωπος, ánthrōpos ("man").

In the book of the prophet Daniel, chapter 5, we can read a possible instance of actual lycanthropy:

18O thou king, the most high God gave Nebuchadnezzar thy father a kingdom, and majesty, and glory, and honour:19And for the majesty that he gave him, all people, nations, and languages, trembled and feared before him: whom he would he slew; and whom he would he kept alive; and whom he would he set up; and whom he would he put down.20But when his heart was lifted up, and his mind hardened in pride, he was deposed from his kingly throne, and they took his glory from him:21And he was driven from the sons of men; and his heart was made like the beasts, and his dwelling was with the wild asses: they fed him with grass like oxen, and his body was wet with the dew of heaven; till he knew that the most high God ruled in the kingdom of men, and that he appointeth over it whomsoever he will.

Myths of people turning into animals have a long history. In ancient Greek legend, Lycaon was turned into a wolf as punishment either for the ritual murder of a child, or for serving human flesh to Zeus. Pliny the Elder told about a man who was turned into a wolf for 9 years, able to turn back into a human if he avoided biting people. The Roman prose work the Satyricon also has a story about someone turning into a wolf. Vikings reputedly channeled the spirits of wolves in battle.[1] While the Western European tradition is best known, there are legends from Russia, the Balkans, the Middle East, and the Americas.

In the early modern period, they were associated with witchcraft, with witches accused either of being able to change into wolves or of being friends with wolves, and several people were tried for wolf-related witchcraft in the 15th and 16th centuries.[2] It was also common in parts of Europe for enterprising witches and wolf-charmers to sell a Wolfssegen, a spell offering protection against wolf attack, and Wolfsbann, a spell cursing somebody to be attacked by wolves.[3]

Traditional beliefs about what werewolves are and what they do show a lot of variation. Features of the myth included[1]

Today the dominant portrayal in fiction involves transformation into a wolf around the full moon, returning to naked human form in an embarrassing location shortly thereafter, and killing with a silver bullet.[note 1]

Berserkers were Viking warriors who associated themselves with wolves, bears, and other savage animals. Much about them is unclear, but they may have believed they were imbued with the spirit of the animal, and were even said to transform into the animal in battle. More recently it has been hypothesised that a lot of hallucinogenic fly agaric mushrooms may have been involved.[4]

As early as the 17th century, people suggested that werewolves weren't real. King James I of England (and VI of Scotland) believed werewolves suffered from delusions. Today, clinical lycanthropy is recognised as a psychiatric syndrome in which people erroneously believe they can transform into wolves.[5] Manuel Blanco Romasanta, a 19th century Spanish serial killer, claimed to have turned into a wolf and killed lots of people, but was unable to transform when asked to; he was sentenced to death for murder, but a French hypnotist got the sentence commuted to imprisonment by suggesting Romasanta's was a genuine delusion.[6] A number of conditions have been suggested as "what werewolves were really suffering from": these range from porphyria to Down's syndrome.[1] Werewolf syndrome or congenital hypertrichosis lanuginosa is a disorder in which a person is covered by an abnormally large amount of hair, and it has also been linked with other forms of hypertrichosis, although these conditions do not produce the desire to bite, howl, or exhume corpses.[7][8]

From an evolutionary perspective, it is of course nonsense to suggest that a human could turn into a wolf or vice versa; such a creature would have to have descended from both humans and wolves.

Instead, it's clearly a case of parallel evolution (akin to dolphins and some sharks having similar shapes); a were-wolf doesn't actually turn into a wolf; it merely turns into a wolf-like form. This can be compared with the transformation of a tadpole into a frog or a caterpillar into a moth. The only distinguishing characteristics of lycanthropy are

We can deal with these individually.

A non-reversible lycanthropic transformation would be strongly selected against for at least one obvious reason: the difficulty of child-rearing. Unlike true wolves, whose pups are born able to walk and quickly reach a level of maturity necessary to feed themselves, human/lycanthropic children/pups share the standard human multi-year maturation process. A lycanthropic human stuck in wolf-like form is severely restricted in child-rearing ability; for instance, such simple acts as nursing, burping and changing a diaper are beyond the capability of the paw-formed hand. More importantly, the wolf-form father cannot teach his daughters about the benefits of abstinence, and generally is not granted admittance to "purity proms". Thus, only reversible lycanthropy is selected for.

Since the selection benefits of human lycanthropy revolve primarily around replacing the standard human weakness in the face of attack with the benefits of protective fur, built-in weapons, speed and aggression, the change must happen fast enough to be a benefit in the face of immediate danger. Thus, slow transformation is selected against.

The full-moon link is the easiest of all to deal with, since it's entirely a case of false correlation. Actually it's an artifact of semi-modern life. Remember that the transformation is selected for in case of danger; it turns out that the hormones which control this are also triggered by other forms of stress. Modern life, with monthly rents and mortgage payments, features a monthly stress-cycle. This translates into a monthly involuntary transformation cycle.[note 2] Of course, this is assuming we are talking about male lycanthropes. When it comes to women, for a few days out of the month my girlfriend turns into a real b— OH GOD PLEASE N—

They usually hang out on the fringes of furry fandom where their preferences run toward more badass (as in the classic werewolf style) anthropomorphic animal art and fursuits, as opposed to the cute-n-cuddly cartoonish style that otherwise predominates among furrydom. The more hard-core shun furry fandom entirely (for much the same reasons that many Wiccans and Pagans shun the New Age movement) and hang out in a few isolated corners of the Internet, and occasionally get together for "howls" where they party it up at a National Forest campsite or the like. These individuals can also be found in and around the otherkin, or therian, communities depending on whether they identify with mythical werewolves or genuine wolves.

Unrelated to the above, Anton LaVey's Satanic Bible includes a ritual alleged to make you a werewolf,[citation needed] and the Christian Satanic Panic-mongers like Mike Warnke and Rebecca Brown are full of tall tales about lycanthropy supposedly being rampant among Satanists. This is all B.S., but Rebecca Brown claimed in her phony-baloney memoir He Came To Set The Captives Free to have had an encounter with a real werewolf in the course of her spiritual warfare against the Devil.

Never, ever moon a werewolf!

The werewolf represents the working man's rage at Russia's corrupt Tsarist system. Whereas vampires tend to be the parasitic nobles feeding off of the produce of the proletariat, the werewolf is a commoner himself. Perhaps well educated and from a relatively wealthy background, but one of the people nonetheless. Therefore it is prudent that the workers rise up and join with the werewolves to take down the bourgeois oppressors! The fact that werewolves are just as brutal and deadly to the average person should also be ignored, because revolution!

Lycanthropy is a plot device in Act V of John Webster's The Duchess of Malfi (1612). If acted correctly, it provides the only laugh in an otherwise depressing (and very long) play.

While a werewolf is perhaps the most famous folkloric pattern of human changing into animal, there are many variants from around the world.