From RationalWiki
(Redirected from Meth)
Jump to navigation Jump to search 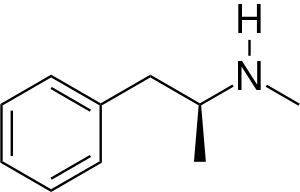 Methamphetamine, also known as "meth", "speed", "ice", or "crystal" is a synthetic drug which causes your car to end up on blocks and your trailer to get really messy. Its users often embark on binges lasting as long as two or three weeks, with no sleep. The crash is very painful, although a little Valium might help.[note 2] Since around 2017, due to strict regulations and international import control of Ephedrine, Methamphetamine is being manufactured with an additive known as N-ISO which is why the drug no longer produces euphoria or days-long wakefulness. You may find that most meth in North America is affected by this and no longer produces the high once-sought after by users of the drug. Note: There is lots of information on iso or n-isobenzlamine online, and on Reddit, this is an international problem and one should really consider not spending their money on this counterfeit product.[citation needed]

Methamphetamine causes you to feel very euphoric, very stimulating, very energised, and very focused. Because of that, it is technically a nootropic, and a ridiculously powerful (and fun dangerous) one. The side effects of meth include: anxiety, paranoia, restlessness, sleep paralysis, psychosis, dysphoria, and addiction. Unlike amphetamine, and most other amphetamines, methamphetamine is directly neurotoxic, meaning it is a literal poison that kills your dopamine and serotonin receptors.[1] It also increases your risk of developing Parkinson's disease due to the aformentioned neurotoxicity.[2] 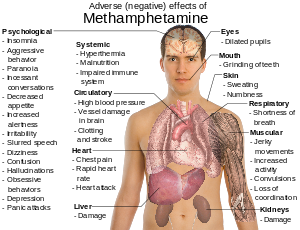 Meth is one of the most addictive and dangerous drugs in the world (though as is often the case, rather less damaging than police, politicians and prosecutors angling at political careers tend to claim).[3] Due to the euphoric effects, it is quite common for users to binge for days at a time with no sleep and minimal food. This combination often leads to some pretty nasty effects, ranging from delusions, paranoia, and even hallucinations. Some users at this stage may also experience “delusional parasitosis” — in other words, the sensation of insects crawling under the skin. When combined with the psychosis that is usually present at this stage, this can lead users to believe that there are literal bugs under their skin, often leading the user to compulsively pick at their skin to “remove the parasites”. Other common hallucinations and delusions include the belief that you are being targeted by police and seeing “shadow people” (as they name implies, entities that appear in the shadows, and are often perceived as malevolent). While many of these symptoms can be avoided by limiting one’s use, making sure to stay awake no longer than 24 hours, testing one’s product, and making sure to stay fed and hydrated, the fact is that meth can be so compulsive that this is often easier said than done, especially given meth’s tendencies to induce strong cravings after use. Additionally, even relatively “responsible” use is not risk free — meth can be extremely addicting, impair one’s judgement, and cause damage to the brain which may in some cases be permanent.[citation needed] The long and short of it is that you should NOT use meth at all — but if you INSIST on using it, and don’t want to deal with paranoia, psychosis, severe brain damage, or any of the other potential effects of irresponsible use, then PLEASE practise basic harm reduction. Weigh your doses. Test your product. Limit your intake. Stay hydrated and nourished. Do not use more than once every couple of months, maximum. Avoid injection. Following these tips does not necessarily mean that meth will ever be good for you — but not following them WILL make things exponentially worse.

Long story short — don’t do meth AT ALL, but if you’re gonna do it anyway, don’t be a moron about it.

The manufacture of methamphetamine, "meth-cooking" as the kids call it, is dangerous to both those involved and the environment. Depending on the method used, it is estimated that the production of one pound of meth results in five to seven pounds of chemical waste, and it's reasonable to assume that the kind of person who'd build an illegal meth lab is not likely to be taking great care in the disposal of the resulting waste.[4]

The little fucker itself.

As anyone who's watched the television program Breaking Bad can tell you, cooking meth requires significant lab safety equipment in order to be done without poisoning or burning the cooks. When a meth lab is raided, special precautions have to be made by investigators and cleanup crews to prevent explosions or inhalation poisoning—in an urban setting, whole blocks are often required to be evacuated and cordoned off in order to prevent injury or death to the surrounding populace.

Since 2010, Most meth labs are Super Labs found in Mexico operated by the Sinaloa Cartel. Due to import control and international cooperatives; unavailability of once easily-acquired chemicals used to manufacture meth, there is a steep decrease in local laboratories and most labs have been busted and their operators imprisoned since the widespread meth enforcement across the world, Particularly in North America. It is indeed very rare to encounter a local meth lab as of 2021. They are a thing of the past. Just search your local news listings for meth lab busts, they just don't happen anymore like they used to and most recent busts are just large quantities of fake product shipped from Mexico. Unfortunately, it seems addicts are still chasing the dragon which is why this market exists. Taking coffee is typically stronger than todays available meth, which you can still be criminally charged for despite actual meth content being less than 15% across the board. Buyer beware.

In America, you're able to legally get methamphetamine in the form of Desoxyn;[5] that is, if you have ADHD and your doctor prescribes you this, congratulations, you now have one of the most dangerous drugs in America (albeit in a safer package). It's mostly safe as long as one follows the doctor's advice (don't snort it, slam it, or smoke it, and don't up your dose).