From RationalWiki
(Redirected from Stereotyping)
Jump to navigation Jump to search

A stereotype is a thought or idea that says that all members of a group have an unrelated trait in common. Common examples include "all black men dance well," "all Asians drive poorly," and "all homeschoolers are Christian wingnuts." It differs from an "archetype" in that the latter is a model to follow rather than a (correct or otherwise) perception. It differs from genotype in that there's nothing you can really do about that one.

Stereotypes are most often encountered when dealing with discrimination, particularly racism, sexism, and homophobia. Stereotypes exist for a reason.[note 1] A persistent stereotype in the population leads to preconceptions which may be wrong, but are difficult to shake off even when they are clearly shown to be wrong.

Originally from Greek: στερεός (stereos) "solid, firm" and τύπος (typos) "blow, impression, engraved mark", used to refer to an exact copy of a typeset page, made by double casting the entire page. The point of stereotyping was that it required no actual typesetting, thus greatly reducing the cost of book impressions after the first edition.

The idea that no original creativity was involved gave rise in a roundabout way to the modern definition, coined in 1798, as well as the related word "cliché."

Stereotyping is a subcategory of the accident fallacy which are fallacies that occur when a rule of thumb is taken to be something that is universally true. In the case of the stereotype fallacy, this is a fallacy that occurs when the following premises are used.

P1 - All people of group X have characteristic Y.

If the person making this argument only believes that it is probable a person from group X has characteristic Y, then it is not a stereotype fallacy. What it might be, however, is an ecological fallacy. An ecological fallacy follows the following format.[1]

Stereotyping is often used in advertising. Sometimes this is done harmlessly; other times it elicits many complaints, resulting in a scandal of some sorts. This can be done intentionally to increase exposure, although it is risky. In the short time or space offered by an advert, the advertiser often needs to get a story or point across without wasting time on introducing concepts or characters. The ballsy mother-in-law or the inept bank manager can be shown and the viewing public can quickly and easily apply a personality to the character in the advert. This works equally in films where a director or writer may not want to waste too much time on explaining who is the "good guy" and who is the "bad guy" (i.e., "let's just get to the giant robots fighting, already!"), so they lapse into using and playing up to stereotypes; the corrupt corporate executive who puts profits over people, the military hardass with zero compassion or establishing the token smart guy by dropping either "CalTech" or "MIT" into the conversation early on. In some respects, this is a legitimate use of stereotypes, albeit unimaginative and liable to be blasted by critics and social scientists who see such exploitation as reinforcement of social norms.

A less uncommon stereotype is seen with anti-intellectualism. At the core of anti-intellectual stereotyping is the idea of scientists being partially insane, white-coat wearing, liberal scum who make sweeping didactic statements of fact that can change at any moment. Conservapedia's article on Professor values is a prime example of this activity. Other stereotypes are that "science" spends its time working on ridiculous things, or proving the blatantly obvious. This is seen often when newspapers report a so-called "common sense" finding and commentators go on about how it was blatantly obvious and a shameful waste of tax-payers money.[note 2]

Note that even "positive" or "self-refuting" stereotypes can have ill effects.

P: All nudity is sexual (especially conventionally “ugly” people who are naked).
C: Nudists and naturists tend to simply be perverts.

Stereotype threat is a psychological phenomenon in which people suffer from anxiety due to the belief that they are confirming a stereotype about their particular social group, or that if they do not confirm this stereotype, they may be socially ostracised. This is known to have an effect on things such as performance on standardized testing.[3] For example, the stereotype is that African-American and black people are less intelligent than those of other races. Thus, they may have anxiety about confirming this stereotype when they take the test and, as a result, actually perform worse than they otherwise would have. This is similar to the self-fulfilling prophecy.

See the main article on this topic: Implicit bias

Implicit association tests have shown that words like lazy and incompetent are more associated with images of obese individuals than images of thin ones. [4] This association is stronger for thin subjects than overweight ones.

The Democratic Party is associated with feminine words including librarian (which is bizarre, given the millennia of males fighting their sisters’ power to learn to read), nurse, and skirt, while the Republican Party is associated with masculine words including janitor, trousers, and razors, regardless of subjects' political affiliation or gender.[5]

The Implicit Association Test (IAT) is used to gauge stereotyping in subjects, for example, by asking them to associate male or female gender to certain words or objects.[6] Some media reporting seems to imply that you can discover how bigoted you are by taking the IAT.[7] However, the test cannot predict how you as an individual will act, it can only predict trends in the larger population, much like how not everyone with a high Body-Mass Index is actually obese. Use of the test in determining specific forms of discrimination has also been criticized -- critics note that the test more likely measures the similar but distinct phenomenon of in-group and out-group effects than specific stereotypes, per se.[8]

Implicit stereotypes can be changed, altered, diminished, or strengthened by promoting a counter-stereotype, or being in the company of others who don't believe the stereotype (attending a women's college may reduces associations between leadership and males). 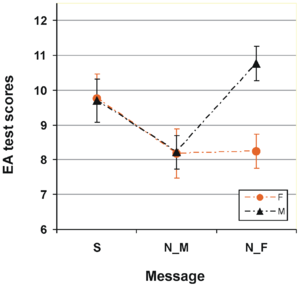