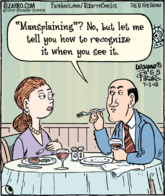 "Mansplaining", a portmanteau of "man" and "explaining," is a snarl word used largely by feminists to describe the act of men "teaching women" — often about things directly related to women's experience (like sexism, or abortion) without any recognition of (or interest in) the woman's actual knowledge of the topic.

Science fiction author Karen Healy describes it as a "delightful mixture of privilege and ignorance that leads to condescending, inaccurate explanations, delivered with the rock-solid conviction of rightness and that slimy certainty that of course he is right, because he is the man in this conversation."[2]

Lily Rothman, in her "Cultural History of Mansplaining,"[3] suggests that while the term itself was not used, the idea of mansplaining might have its roots in Rebeca Solnit's 2008 op-ed piece called "Men Explain Things To Me."[4]

Not to be lulled into an idea that a man speaking "for women" and pressing their own point of view to them is somehow new, Rothman quotes a 1903 article from The Atlantic where one Lyman Abbott explains to us all why women do not really want suffrage: "[he] totally knows what they want better than they do. Any woman in favor of suffrage just doesn't get the true female experience as well as he does."

Take any topic, whether or not it is an area of expertise for you. Assume the woman beside you knows nothing about it — especially if it's cars, computers, machines, guns, machine guns, computer-operated machine guns, cars with machine gun attachments, or other manly things — or that your opinions on the subject are more important than hers. Explain it to her in a smug, patronising way. Dismiss any objections, clarifications, or comments she might offer, as well as claims that she already knows the topic.

Advanced course: Instead of just any topic, pick one that really interests women, like women's rights, feminism, birth control, or how 9 months is just no big deal[5] and of course how easy it is to lose weight, if only women would follow your plan. Then patiently explain to them what they are missing about your point of view. If they try to interject, simply talk louder.

Super advanced course: Talk about the same topics, but don't even bother inviting the silly women to the discussion.

But perhaps the worst moment was when the US Congressional House committee, studying the birth control issue in and around the context of Obamacare, convened a panel of ethics experts to discuss birth control and how important it is (or isn't) for women. The entire panel was men — religious leaders from their various churches and temples.[9]

Though perhaps not truly mansplaining in its most common sense, the basic concepts of intellectual discourse about women's needs shows up often in discussions about abortion. Philosophical discussions regarding abortion often focus on cold, distanced commentary focusing on the fetus — the nature of life, quality of life, when life begins (as if the sperm and egg aren't themselves living tissues), and a fetus's potential rights in relation to all other living beings (far less, discussions of its relationship to the very real, named, faced woman that said fetus resides in). Since women in general, and the actual pregnant woman, are often missing in these discussions about the fetus, those conversations have some earmarks of superciliousness, without intentionally dismissing their views.

Many traditionally male-dominated arenas on the Internet who wish to broaden their influence are now grappling with issues about sexism. These discussions often lead to women saying "This is why I feel the site/topic is sexist," or "I feel unwelcome here, because of..." Mansplainers come out of the woodwork to explain to women that the women don't really "understand what sexism is," or "are taking it wrong and shouldn't be feeling that way" or simply "those things don't really matter to our issue at large, and distract us from our group's goals."

One such example came to a head when social commentator Anita Sarkeesian decided to write a series on how women are presented in video games. Before she had written one word, an avalanche of gamers came out to tell her she was wrong, there was no sexism in video games, women are more strongly portrayed than ever before, and oh by the way, why does she care, women don't play video games.[10] A columnist for Destructoid put together a half-assed response to Sarkeesian's specific criticisms that ended up coming across as a justification for why sexism is actually okay.[11]

Atheist blogger Sharron Moss at Blaghag said that she attended an atheist conference with the specific agenda of discussing women's experiences at atheist conventions and figuring out how to attract more women to said conventions.

The panel consisted of... five men and only one woman. The panel was accused of taking questions or hearing comments mostly from men in the audience. When the women actually did speak, introducing issues such as child care and family friendly events, along with "feeling objectified," and "not being listened to," the women were, according to Moss, told that those are just trivial issues, and didn't really affect atheist women's attendance. Then, at the conference and in blogs and vlogs after the conference, the panel once again asked "what is the problem with women's attendance, and why will no one open up and discuss it"?[12] Facepalms ensued.

See the main article on this topic: Elevatorgate

Rebecca "Skepchick" Watson was invited to an atheist convention to speak on topics of media and outreach. One question revolved around the scarcity of female atheists in public perception. Watson gave various opinions, but highlighted that in her experience, women often feel objectified at intellectual conferences, and often feel as if simply showing up to a conference makes them a target for advances, rather than equal participants in discussions. In a video about the conference, she related a story of being invited back to a man's apartment "for coffee" in an elevator at four in the morning. She said that she wasn't offended, or threatened, but that such behavior was the kind of thing "not to do" if you really want to attract women.

Richard Dawkins of all people decided to jump into the ensuing fray, opining that this was the way of the world, and she should take it as a compliment that she was just so beautiful, and realize that women in the rest of the world had it much worse. And this is from someone who has made a career of stressing that discrimination against atheists in the West should not be ignored just because other countries have laws as restrictive as mandating jail or death for apostasy and blasphemy.

While the term mansplaining really focuses on men telling women how best to understand women's issues, the concept is hardly limited to how men treat women. It is routinely found in any conversation where someone in a socially dominant position "explains" life to someone in an inferior (often oppressed) position. Misplaced scholars telling indigenous people how their culture is supposed to be understood; white people telling black people when to be offended at racial slurs; Capitalists telling Communists what they really think; gay people being told by straights why they don't really want marriage, 'cause marriage isn't that great anyhow; and everyone having a token "best friend" of some minority class, giving the 'splainer some magical insight into what it really means to be Mexican, transgender, deaf, poor, or what have you. Lesser-known words derived from "mansplaining", such as "whitesplaining" and "straightsplaining", have been coined to similarly describe these other situations.

Nothing about mansplaining (or its derivatives) should suggest that someone who isn't part of a subclass/minority class should not have an opinion about a topic specific to that group; it's to say that one should consider where his or her authority stems from, and when actual real voices from that class are speaking, you should stop and listen. There is no single voice for the range of people in feminist, transgender, black, and other, communities. Views are and should be a plurality, but we should be careful not to silence that plurality by imposing a single voice, especially when that "voice" claims to speak for a group they aren't even part of.

Not to be confused with...[edit]

Often, when dealing with creationists, conspiracy types, or college freshmen, one often finds oneself having to clarify to one's opponent the very core of his own argument. "No, that's not how thermodynamics works, and even if it was, it doesn't change your premise that life requires energy input — since the Earth is powered by the Sun."[note 1]

It's also not to be confused with being an actual expert on a topic (or simply knowing more than the target audience). When you respect the audience, and your goal is to add to their knowledge base, rather than just tell them what's what, you are simply being an educator. Along these lines, it should not be confused with somebody with simple disagreement. Somebody in a marginalized class who disagrees with a man who is participating under otherwise equitable terms of conversation and/or debate cannot claim "mansplaining" simply because they don't like being disagreed with. The term then becomes, in effect, a silencing tactic.

Sealioning is a related phenomenon where people ask dumb or simplistic questions, rather than making dumb or simplistic statements, but also serves to derail a debate or conversation. In an abortion debate, a sealioning man won't say something stupid, they'll ask a stupid question.

Nor is it to be confused with being a snide little know-it-all who boasts about everything to anyone and everyone who'll listen — male, female, or otherwise. Much.

Criticisms of the use of the term[edit]

The use of the word "mansplaining" has attracted some criticisms and it is the subject of controversies. Most of the objections can be summarized as: