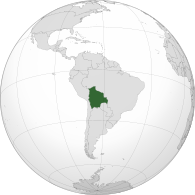 Bolivia is a South American country, among one of the poorest countries in Latin America. It also has enormous reserves of lithium and coca natural gas. Bolivia also attempted to privatize the water supply, with predictable results.[1] Most Bolivians lack health insurance as well, contributing to the general atmosphere of failure.[2] It has a history of Juntas which finally ended in 1982. Socialist Evo Morales, who wasn't particularly well liked by George W. Bush,[3] was the country's long-running President since 2006, until his resignation in 2019.

Morales ignored mass demonstrations and popular dissatisfaction and was allowed to run again; during the 2019 election, his party was accused of messing with the electoral system, as the OAS provided evidence of consistent and widespread irregularities. [7] The problems were so widespread that even Morales was forced to recognize it and called for a new election. It must be noted that the OAS's findings were considered questionable. The analyses were deemed flawed by the New York Times, who concluded that there was some fraud but that it was unclear how much or if it was sufficient to change the result of the election.[8][9] The Center for Economic and Policy Research (CEPR) concluded that "it is very likely that Morales won the required 10 percentage point margin to win in the first round of the election on 20 October 2019."[10] David Rosnick, an economist for CEPR, reported that "a basic coding error" was discovered in the OAS's data. Instead of ordering time stamps on voting tally sheets chronologically, they were ordered alphabetically, leading to the "inexplicable change in trend" alleged by the OAS in the preliminary count.[11] However, the Bolivian army turned against Morales and called for his resignation, which he accepted. Because those immediately in the line of succession also resigned alongside Morales, the then-second vice president of the Senate, right-wing traditionalist Jeanine Añez, was chosen as the new acting president. New elections took place on October 18, 2020, and the candidate from Morales's party, former Minister of Economy Luis Arce, won a majority of the vote against Carlos Mesa, Morales's opponent in the 2019 election (Añez also ran, but dropped out before the election).

During his administration, he significantly increased the Human Development Index score of the country over years, starting in 2005 with an HDI of 0.632 and ending in 2018 with 0.703. He was the first indigenous President of Bolivia, a country that, despite being largely indigenous in terms of demographics, has had many white leaders. In his first election bid, Morales received a lot of support from indigenous communities across the country, but later lost that support due to questionable investments, such as the 34 million dollar investment into his glass palace the People's Great House in La Paz.[12]

Bolivia is a large producer of cocaine, and thus has been receiving much pressure to shut the farms down. As the president was a member of the coca growers' trade union, this isn't likely to happen. Donald Trump's policy of continuing the War on Drugs means that it is likely the strained relations with the US will continue.

Bolivia has an irredentist national holiday, the Día del Mar (Day of the Sea), dedicated to commemorating and reversing the loss of its coastal territories to Chile in the War of the Pacific.[13] Irredentism is even a part of the Bolivian Constitution, being considered a "permanent and irrevocable objective of the Bolivian State."[14] Such irredentist attitudes are also promoted in some Bolivian textbooks.

As one of the cradles of ancient Andean civilization, Bolivia has attained some degree of interest from woo-chasing hippies, spiritualists, ufologists and others. See Tiwanaku (an ancient Bolivian city) for further detail.

Bolivia is famous as the place where the CIA totally the Bolivians assassinated Che Guevara.