From RationalWiki
(Redirected from Charismatic)
Jump to: navigation, search

Pentecostal is a term used within Christianity to denote those fellow-Christians who place a primary emphasis on the "gifts of the Holy Spirit". According to Pentecostals, "gifts" such as faith healing, prophecy, and speaking in tongues occupy a primary place in the life of the church. Some Pentecostals also follow practices such as foot washing which do feature in the Bible but are not practiced in other Christian denominations. The movement started circa 1900 at a revival meeting in Azusa, California

Non-pentecostal Christians, particularly in the Roman Catholic Church, hold that the "age of prophecy" that included the above practices has come to an end (i.e. that sort of stuff was only legit in the 1st century CE, before everyone settled down and the rag-tag followers of the Nazarene sect[1] became a Respectable Religion).

Pentecostal denominations include hundreds of groups, of which the most prominent include the Assemblies of God

, the Pentecostal Assemblies of the World

, the Church of God (Cleveland, Tennessee)

, the Church of God In Christ

, the Church of God of Prophecy

, and the Vineyard Fellowship

Although most scholars consider Pentecostalism clearly a part of Protestantism, early 20th century Pentecostals were often more in line with Restorationism -- teaching that the early church had fallen into complete apostasy and that God was restoring the original church.

Early Pentecostals taught strict separation from "worldly" influences such as refraining from movies, dancing, cards, or public swimming pools, and at least some of them espoused Christian pacifism; these beliefs have been all but abandoned as Pentecostalism moved from being a fringe religion with a "wrong side of the tracks" reputation into the mainstream of American evangelicalism during the middle and late 20th century.

Early Pentecostals were known for fervent revival meetings and traveling tent evangelism. Some of their evangelists like Aimee Semple McPherson were well known and controversial, often considered faith healing charlatans by the general public and the media. Not much different a situation from today.

During the initial decades of the movement, Pentecostals thought it was sinful to take medicine or receive care from doctors. [2] 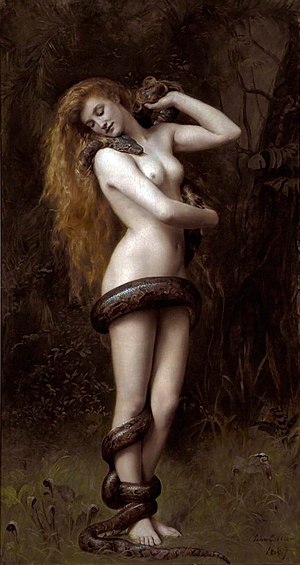 This woman must be especially holy according to snake handlers.

The Charismatic Movement is a closely related movement which follows Pentecostal practices but tends to do so in a more subdued manner with a contemporary worship style, and exists as a subculture within many "mainline" denominations (Methodist, Roman Catholic, Episcopalian, Baptist). Today, some old-school Pentecostal denominations such as the Assemblies of God, and the newer Calvary Chapel and Vineyard Fellowship, are more likely to self-identify as Charismatic rather than Pentecostal. Many independent megachurches and televangelism ministries are part of the Charismatic Movement. Another term used interchangeably with Pentecostalism is Full Gospel, used by some churches to denote their belief in the Pentecostal gifts, and by some Charismatic para-church organizations such as the Full Gospel Business Mens Fellowship International.

Pentecostals and Charismatics are occasionally referred to as "holy rollers", after a particular group who used to roll around on the floor when possessed by the "Holy Spirit." This was somewhat more spectacular to watch than the Quakers and the Shakers, who just used to quiver a bit. Other manifestations of the Holy Spirit include prophecy, by which God tells his congregations stuff they already know, and speaking in tongues and the interpretation of tongues, which works the same as prophecy but shares the guilt between two. Modern exhibitors of this gift seem to have forgotten that an actual language is supposed to be spoken, rather than a collection of random gibberish.

A notable innovation the Charismatics brought to Pentecostalism was the old hymns being largely abandoned in favor of repetitive "praise" choruses sung in church, and the popularisation of Christian Rock. Both of these have their origin in the Jesus Movement of the early 1970s, which was contemporaneous with the Charismatic Movement and shared much of the same interest in reviving the gifts of the Holy Spirit within mainline Christianity, as well as making it more contemporary and relevant to young people.

Many of the prominent televangelists who made their names operating faith healing crusades come from Pentecostal or Charismatic backgrounds, including Oral Roberts, Peter Popoff, Jimmy Swaggart, Jim Bakker, Barty Paul Crouch, and Morris Cerullo. Pat Robertson, although a Baptist, follows a Pentecostal belief system. "Name it and claim it" theology is notably rampant among Pentecostal and Charismatic televangelists these days. Most Pentecostal churches view homosexuality as a sin. [3]

A notable theological division among Pentecostals concerns the proper formula to recite during baptism. Most recite "In the name of the Father, and of the Son, and of the Holy Spirit". The United Pentecostal Church, the Pentecostal Assemblies of the World, and the followers of William Branham, believe baptism should only be done with the words "In the name of Jesus", and go so far as to insist that those who were baptized the other way have to be re-baptized or they are in danger of losing their salvation.

The main Pentecostal church/religion in Brazil is the Universal Church of the Kingdom of God (Igreja Universal do Reino de Deus), which was founded by Edir Macedo in the 1970's, after he gave up being an evangelical pastor. With the money he earns from the church/scam, Edir managed to buy one of Brazil's open TV channels.

Despite videos of him teaching other men how to properly scam their followers[6] and numerous investigations[7] regarding whether or not they were doing illegal activities (religious scam is completely ok within the Brazilian Constitution, or so it seems), it managed to earn enough money to buy one of the country's largest TV networks, Rede Record, back in 1991.

Another strong Pentecostal church is the Worldy Church of God's Power (Igreja Mundial do Poder de Deus), founded by Valdemiro Santiago, ex-pastor of the Universal, probably because founding his own church was way more lucrative. (One might think the "Worldly" part of its name to be a dead giveaway, but the word does not carry that connotation in Portuguese. A better translation would be Worldwide.)

Both churches are seen with great disdain from those outside, mainly because they charge their followers 10% of their monthly salaries (referred to as a "Tithe") and will often sell "blessed" items, such as holy water and blessed pillows, sometimes priced at around R$300 (~US$140). Followers will often sell and donate their belongings to these churches, including cars and apartments or houses, in exchange for indulgences blessings. Many lost everything to these, blinded by their faith and by their pastor's honeyed lies of "the more you donate, the bigger your faith, the bigger your [worldy] rewards".

These churches are renowned for their exorcism sessions, often televised, where the saintly pastor will make a huge drama to amuse idiots expel malign demons from people who are possessed by these evil entities. One of the most remarkable is one where a woman, who used to be one of the church's godly workers (obreira), became possessed by evil demons after she distanced herself from the church. Sometime after this, she became "pregnant", feeling pains and her mother claims that she even entered labor, when she finally gave birth to three plastic keychain skeletons.[8] Yes, that's the level of idiocy and credulity we're dealing with here.

Also, as of January 18th, Forbes named the richest Brazilian pastors, with Edir Macedo being the richest, his fortune amounting to R$1.9 billion (~US$950 million). Despite this, the vast majority of these guys' followers still believe he (whichever) is an example of humility and the next closest thing the world will get to a second coming of Jesus.[9]

The Elim Pentecostal Church is a denomination mostly operating in Britain and Ireland that was founded by George Jeffreys in 1915 in the town of Monaghan, Ireland. Jeffreys was a Welsh-born revivalist preacher and a proponent of British Israelism (the belief that the British are descended from one or more of the tribes of Israel). The founders differed from mainstream Christianity but shared with other Pentecostalists the belief that miracles did not end with Jesus but continued into the present day.[10] Jeffreys left the church in 1939 after various doctrinal disagreements, but it continued without him. It is now based in Malvern, Worcestershire, England.[11] It claims to have over 550 congregations and "tens of thousands" of worshipers in Britain and Ireland as of 2019.[12]

Its theology is based on a set of "Foundational Truths".[13] These include: