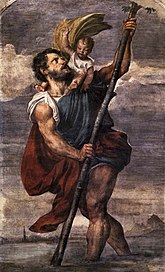 Saint Christopher was a saint venerated in Roman Catholicism and Eastern Orthodoxy, who had been listed as a martyr from the reign of the 3rd century Roman emperor Decius (reigned 249 - 251), but is now considered likely to be mythical.

There are several legends about St. Christopher, the most popular of which is preserved in Jacobus de Voragine

. The story states that Christopher was a sort of Canaanite giant or ogre, who was said to have lived during the first half of the 3rd century. He was twelve cubits[note 1] tall, and had a most fearsome countenance. In Eastern Orthodoxy he is conventionally depicted as a "cynocephalus

", a type of mythical humanoid with a dog's head.

His name originally was "Offero" or "Reprobus." Such was his pride, that he vowed that he would serve only a master who was more fearsome than himself. After research, Christopher determined that the Devil was a likely candidate. He therefore pledged himself to the Devil's service, only to abandon the Devil when he learned that the Devil was in turn afraid of the cross of Jesus Christ.

Christopher then vowed to serve Jesus instead, and became a Christian. He sought out a Christian hermit to inquire as to how he could better serve Jesus. The hermit directed him to a dangerous ford in a swift river, and suggested that Christopher's great size and strength made him a good candidate to assist people in crossing. Christopher began ferrying people across the river on his broad back.

One day a small child approached the river and asked to be carried across. Christopher began to comply, only to learn that the small boy was far heavier than any other passenger he had taken. The child revealed that he was in fact Jesus Christ, and that his unusual weight was due to the fact that he bore the sins of he world. The boy then baptised Christopher in the river. Christopher then acquired his new name, which is Greek for "Christ-carrier" (christo-phoros).

The child then told Christopher to plant his staff in the ground. The staff miraculously bloomed into a fruit-bearing tree. This miracle converted many. Enraged at these conversions, a local king had Christopher imprisoned, where after cruel tortures he died as a martyr.[1]

The veneration of this improbable figure was sharply criticised by Erasmus in his Praise of Folly. Erasmus noted a superstitious belief that those who viewed an image of St. Christopher would not die by accident that day.

Christopher's feast day formerly was July 25; it was downgraded by the Vatican to a purely local commemoration in 1969, on the grounds that it was unlikely he ever lived. Christopher was formerly one of the Fourteen Holy Helpers, and the patron saint of travellers. Despite his demotion, devotion to St. Christopher remains popular among Roman Catholics, as evidenced by the medallions issued in his name, which are thought by some to be amulets that confer safety upon travellers. These circular or oval medals usually depict Christopher carrying the Christ Child over water, with a message around the edge such as "St Christopher Protect Us", and are often worn around the neck.[2]