'Ere be the stones.

Stonehenge is a landing-pad for alien spaceships, built by the ancient Druids, in consultation with their alien masters, on a powerful intersection of ley lines running towards Atlantis and El Dorado. Or maybe it was satanic giants?[1]

According to those not buying into these obvious truths, Stonehenge is merely a megalithic structure in the United Kingdom. Archeological investigation and dating has given a best guess that it was built and re-embellished in about three different phases between approximately 3000 BCE and 2000 BCE, initially the Windmill Hill culture

around 3000 BCE, then the Beaker culture

which displaced them a bit later (whether by invasion, assimilation, or whatever, we don't know), and finally the Wessex culture

The bottom line is that nobody knows for certain why it was built because the people living there didn't know how to write. (Writing was only introduced to Britain by the Romans in 49 CE, some two millennia after Stonehenge was finished and a different people occupied Britain by then.) About all that we can know about the rituals conducted at Stonehenge was that they included massive feasts. The remains of pigs found slaughtered at Stonehenge and Avebury had been brought to the sites from quite distant parts of Britain, including north Wales and Scotland.[3] Whatever the rite conducted there, it seems to have been 'bring your own food', and attracted tourists from distant parts of Britain.

Because the stones are quite big and FUCKING HEAVY, some people have understandably shown skepticism for the idea it could have been made by neolithic people with only stone and wooden tools and no source of power other than human strength and maybe horses or cows. Their proposed architects? UFOs. naturally. This ignores the fact that while it's very big, there are lots of other instances of stone and bronze age people making huge stone structures including in Easter Island (which despite what the History Channel would have you believe, has actually never even had a mystery about it to solve in the first place), and the numerous other standing stones found throughout the quieter parts of the British Isles. There are many theories of how the stones could have been moved and erected, using rollers, mats, ball bearings, levers, simple wooden cranes, pits, earth mounds, brute force, and much more, such that all the people attempting to demonstrate the construction of Stonehenge could probably have built a dozen examples.[4] This leads to the interesting possibility that Stonehenge could have been erected by amateur archaeologists seeking to prove how Stonehenge could have been constructed.

Something interesting about Stonehenge is that it is partly made out of a blue stone called, creatively enough, bluestone. While most neolithic monuments were sensibly made from local rock, bluestone had to be brought from over a hundred miles away, from the Preseli Hills in Wales, possibly by sea, or more likely levitated into place by Merlin. Hang on a minute, that can't be right… look — it's Julian Cope! The Wizards Did It theory apparently dates to Geoffrey of Monmouth in the 12th century, who said Merlin flew the stones over from the Giant's Ring in Ireland where they had been brought by giants from Africa; they were supposedly erected in Wiltshire as a tribute to British leaders killed by the villainous Saxon Hengest, and good luck spotting all the historical fallacies in that statement.[4][5] One suggestion is that they took the stones from an earlier stone circle in Wales and brought them to Stonehenge, if that would be easier than cutting them nearby.[6]

Some believe Stonehenge has supernatural origins and some neopagans think was a place of worship for the "old religion." Archeologists note that the monument is older than the Druid religion which dates from the Iron Age, but this has not kept various theories linking Stonehenge to the Druids from proliferating. This is, however, dispelled by the fact that Stonehenge was built 2000 years before Druids first arrived in the area. Similarly there are incorrect claims that Stonehenge was built by Celts, Druids being a subclass of Celts (see neopaganism).[7] Celtic nationalists and pan-Celticists

want to claim that Celts were the best and were responsible for everything; in reality there is little evidence of a distinctively Celtic culture in the British Isles, and Celtic languages probably arose in the first millennium BCE, long after Stonehenge.[8][9] 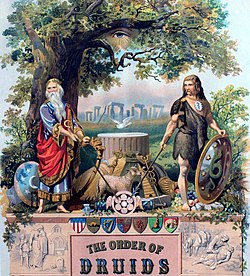 Promotional image for the Order of Druids, founded in 1958, with Stonehenge in the background.

Claims about Druids date back to the late 17th century, and Druid worship of some form has been held at Stonehenge on and off ever since. John Aubrey

(1626-97) was perhaps the earliest proponent in his text on stone circles called Templa Druidum; at the time it was widely believed that Stonehenge was built by the Romans (presumably because they were one of the few ancient people known for their large-scale stone structures), and certainly nobody knew about the actual builders. One of the pioneers of the Druid theory was William Stukeley

(1687-1765), a doctor, freemason, Anglican vicar, friend of Isaac Newton, and amateur archaeologist who sought to defend Christianity against deists and rationalists by proving that the Druids were actually Christian, and so were the ancient Egyptians and Plato, and everyone throughout history worshipped the Trinity in some form or another, because it was so obvious even if you weren't exposed to Judaeo-Christian sources that you'd have to come to that conclusion from first principles. Stukeley conducted excavations at Stonehenge and Avebury in his capacity as secretary of the Society of Antiquaries of London, and noticed their connection to the solstices, but unfortunately then linked them into his fantastical pseudohistory, claiming that Stonehenge was built by Druids descended from Phoenicians who had settled in Cornwall led by the classical demigod Hercules, and who had independently worked out the truth of the Trinity and thus were secretly Christian. This also linked in with attempts to prove that the Church of England wasn't just a cynical invention of Henry VIII to allow him to marry a lot, but was actually an ancient faith linked to Britain's distant past.[10][11] Regardless, Stukeley's claims about Druids were completely different to what modern day Druids believe, as well as probably very different to the actual pre-Roman Druids.

At the same time, various people suggest that the Druids may have worshipped at Stonehenge just because it's there, without having built or modified it.[12] Fringe theories hold that druids may have carried on pre-Celtic traditions from the builders of Stonehenge, but there is absolutely no evidence of this. While the term "Druid" appears specific to the British Isles (there is debate about whether it is Brythonic or Goedelic in origin), there is some argument about whether other Celtic tribes had similar people with different names (probably), or whether (as the proponents of ancient druid tradition would hold) the function was unique to the British Isles and therefore just maybe part of an older British tradition (where absence of evidence of Druids in France counts as evidence of Druids in the UK).[13] Other than the fact that Druids in Wiltshire almost certainly saw Stonehenge, there's no evidence of a connection.

Today there is regular Druidic worship at Stonehenge, principally at summer and winter solstices, and led by figures such as Arthur Uthur Pendragon

(not his real name), a Druid since 1986 and also a campaigner for greater access to Stonehenge and reduced parking fees.[14] A former biker, he believes he is a reincarnation of King Arthur, and is head of a polytheistic neo-Pagan group called the Loyal Arthurian Warband whose other members allegedly include Ozzy Osbourne and John Lydon.[15][16]

While some archeologists would like to think Stonehenge had just a singular purpose, many Neopagans believe that it probably had multiple purposes, because it is designed to align with multiple events (such as the lunar cycle). The latest theory is that the monument was built to celebrate a grand act of union between previously warring tribes.[17]

Currently, the monument is aligned so that the Sun rises from behind the "heel stone" on the midsummer solstice. This leads some to claim Stonehenge as a kind of 'ancient observatory'. Further shades of woo are indulged in by Velikovskians and other pole shift enthusiasts, who in various attempts to both have their cake and eat it, will claim that the fact that the heel stone was moved means the Earth's orbit and/or pole must have moved, or conversely the fact that the heel stone hasn't been moved means that the Earth's pole and/or orbit must have moved just before Stonehenge was built and they built it to measure the new seasons.

The site appears to have been used as a burial site by the Windmill and Beaker peoples, specifically as a resting place for cremated remains.[2] The idea that Stonehenge was principally a burial site or funerary monument has been promoted by archaeologists including Mike Parker Pearson of the University of Sheffield.[18] Whether it was the only or primary purpose is less clear (Neolithic graves oriented with the solstice are certainly a thing in the British Isles, even predating Stonehenge).[19]

It should probably also be pointed out that the ancient Britons built megalithic structures, dolmens and stone circles all over the British Isles and northwest Europe. As architectural fashions demonstrably change over the years, it is always possible that they simply thought they looked pretty damn cool.

There are also claims of human sacrifice at Stonehenge, but there doesn't seem to be any evidence of this. Claims arose because individual stones were named as the Altar Stone and the Slaughter Stone in the 18th century (or possibly even later), rather than from any actual knowledge of historical practices at Stonehenge.[7][20] It has been suggested that the Druids or Celtic-speaking people of Britain practiced human sacrifice around the time that Romans arrived, according to reports by the Romans and archaeological evidence such as Lindow Man.[21] But as already established, Stonehenge wasn't built by Celts or Druids, and it's not clear that anyone was sacrificed at Stonehenge by anybody.

Erich von Däniken claimed it was built by aliens as some kind of landing pad, and supposedly represented the Solar System.[22] As yet, archaeologists have failed to find any incriminating evidence.

By the way, in case anyone asks on your SAT or A-Levels, Stonehenge is not actually a henge

. Why did they name it that? Same reason they built it, one supposes.[note 1] Take it as one of those oddities of our language, just as a peanut is neither a pea nor a nut.