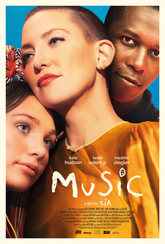 You know, they say that money turns you bad

Music is a well-intentioned but ultimately ableist pop psychology film, directed by Australian singer and musician Sia. Music portrays autistic people, via its titular character Music, as being socially inept, emotionally over the top and hyper-dramatic, unable to cope with even the slightest changes in routine, and as seeing the world in surrealistic ways. Much criticism of the film came from Maddie Zeigler's performance as Music, which has been described by autistic advocates as being stereotypical and ill-researched, and for relying on negative or outdated perceptions of autism. In the time since its release, the film has become a prime example of how a well-intentioned project can become a hurtful smear against a marginalized community.

The project was announced sometime in 2015, when singer Sia Furler announced that she was directing a film starring Maddie Ziegler.[1] Zeigler is a dancer and actress who has appeared in many of Sia's music videos, and has worked with Sia since she was 12.[2] She was set to be cast as the lead from the inception of the project. While the film was initially intended to be non-musical, it evolved into a musical during production, with Sia recording a full album for the film. Filming was completed in 2017, but editing went on for 3 years because Sia wanted it to be "the best movie it could be".[3]

After several delays, the film came out in January-February 2021 globally, to overwhelming criticism. Some points made against the film include:

Hah. That'll get rid of the haters.

While Sia ultimately did apologize for (some) of her actions, she had a mild temper tantrum on Twitter responding to autistic actors and advocates.[9] She has said little about the film since, other than in press releases and late-night interviews.

Critically, the film has been almost universally panned. A small minority of defenders exists, but the general consensus is that Music was a misguided, poorly researched, and self-absorbed effort by a musician to get representation points. The Autistic Self Advocacy Network (ASAN), the Alliance Against Seclusion and Restraint (AASR), and CommunicationFIRST have spoken out against the film and condemned its restraint scenes, as well as Zeigler's/Sia's depiction of autism. On the other side of the coin, Autism Speaks (where Sia got most of her research from) and the National Council for Severe Autism spoke in favor of the film, with the NCSA stating that shaming Sia for casting choices was a "tragedy for the arts and the autism community." [10]

The film itself was a major flop, grossing around $600,000 off of a $16 million dollar budget. While this may be partly attributed to limited releases and pandemic traffic, in the end the film was killed by the negative PR surrounding it, the negative response to Sia's own responses, and the growing concern over her relationship with Zeigler, which apparently has involved the two living together and sleeping together in the same bed since Zeigler was still a teen. Yikes. Regardless, it is unlikely that Sia will dip her hand into the world of directing again, given the sheer weight of backlash against this film. Hey, at least it won 3 Golden Razzies.[11]