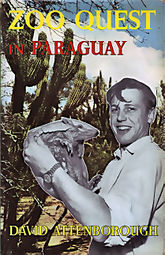 When TV was still black and white.

Sir David Attenborough (8 May 1926–) is possibly the greatest living Englishman. He has been the face and voice of natural history programmes on the BBC since the 1950s.

David Attenborough was born in Isleworth, Middlesex, in 1926. He won a scholarship to Clare College, Cambridge where he read zoology, geology and mineralogy and obtained an Honours Degree in Natural Sciences. He joined the BBC in 1952 as a Talks Producer and was responsible for a number of successful television series. While planning a series of natural history programmes he developed the idea of filming animals in their natural habitats and then showing the same animals in the studio - the collected animals being donated to London Zoo. His first foray in TV presenting came with Zoo Quest, which involved an expedition to Sierra Leone. The popularity of the series resulted in Zoo Quest to Guiana, Zoo Quest for a Dragon and Zoo Quest in Paraguay.[1] 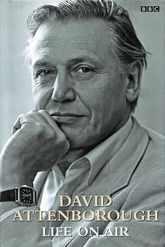 The man who introduced colour TV to the UK. So all that snooker was his fault.

Attenborough was made controller of the fledgling BBC2 TV channel in March 1965 which was struggling for viewers and later oversaw the introduction of colour broadcasting to the UK in 1967. As controller of BBC2 he introduced longer documentaries - 50 minutes rather than the standard 30 minutes - bringing archaeology to the airwaves with Chronicle, general science with Horizon and biology with Life. At a time when American jazz and swing bands were struggling, BBC2 booked the likes of Duke Ellington, Louis Armstrong, Woody Herman and Ella Fitzgerald to visit Britain as a prelude to national tours. Other landmark series commissioned by Attenborough were Sir Kenneth Clark's Civilisation and Jacob Bronowski's Ascent of Man.[2]

In 2012, Attenborough stated he is an agnostic[3], and that he has always known a transcendent, moral god makes no sense when viewed through the lens of modern biology. When believers talk to him about the "beauty of God's creation proving God's existence", he reminds them that such a god would also be responsible for the existence and lifestyle of a fly in Central and South America

whose larvae live in the eyes (or other body parts) of young children.[4] He has stated several times that he has never had any particular religious faith, claiming in an amusing quip "It never even occurred to me to believe in God."

Referring specifically to Christianity, Attenborough argued that Genesis gives people the presumed "right to dominate nature". Since 2002, he has been actively working to counter the rise of movements promoting the inclusion of "Intelligent Design" in school curricula in the UK.

Attenborough's 2011 series Frozen Planet was made in 7 episodes. However, the final episode, "On Thin Ice", which dealt with 'global warming' was not aired by the Discovery Channel in the USA because of not wishing to upset climate-change deniers "scheduling issues".[5]

Comments on the existence of the Yeti[edit]

On the British chat show Friday Night with Jonathan Ross, Attenborough referred to the existence of the Yeti as "an unanswered problem." "I am absolutely baffled by the abominable snowman--which is also called the yeti or sasquatch, because very, very convincing footprints have been found...nobody goes up to 19,000 feet just to make a joke."[6][7]

In his 2002 documentary The Life of Mammals, Attenborough presents the highly controversial aquatic ape hypothesis (the idea that human ancestors adopted bipedal locomotion and other traits by adapting to a semi-aquatic environment) as fact. In fact, the hypothesis is accepted by few in the scientific community and is under heavy scrutiny.

During the 2014 Winter Olympic Games, Attenborough used his trademark eloquent opening monologue to describe a women's curling event (in this case, Great Britain vs. the United States) as if it was an event in nature, where Attenborough called the curling stones walnuts and talking about how the alpha females were instructing the herd in directing the walnut into the center of the house.[8]

As companions to his TV series, Attenborough has written several books: