From RationalWiki
(Redirected from Ableist)
Jump to: navigation, search 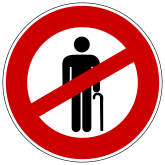 Three legs at night? Guess you have to stay home.

Ableism is a form of discrimination and prejudice that targets people with disabilities. Ableism manifests in multiple ways, from milder forms like insults, harassment and bullying, to serious forms like abuse, victim blaming, torture, and outright murder. It is based on the discredited idea that people with disabilities are "less than human" and "unworthy of life" with them. Ableism can take more blatant forms, such as bullying, neglecting, abusing, and persecuting people with disabilities, and more subtle forms, such as talking down and patronizing disabled people and treating them like helpless children and objects of pity rather than autonomous living beings.

In Nazi Germany, people with disabilities were targeted for extermination and genocides due to being seen as biologically inferior and a threat to the building of a "genetically superior" "Aryan" race. Over 300,000 people with disabilities were forcibly sterilized, and over 200,000 were massacred by death squads during the Nazi regime for having mental and physical disabilities. A German psychiatrist named Hans Asperger, for whom Asperger's syndrome is infamously named, concluded that the hyperfocused and calculating nature of his patients meant that some children were worth keeping around for the rest of Nazi society to use as "drones" and "useful idiots" for the Nazi regime, but sent many more children to a nearby concentration camp where most of them met certain death by involuntary euthanasia and execution. While the Nazis are the most extreme and horrific example of ableism, it was not uncommon for other Western countries, including the United States and the United Kingdom, to promote the sterilization of people with disabilities during the heyday of eugenicist pseudoscience.[1] Stalinists were not immune to these ideas either, as under Joseph Stalin's regime, the Soviet Union deliberately segregated children with disabilities from the rest of society for "standing in the way of building a socialist order", [2] and disabled people were likewise victimized and targeted for genocides by Pol Pot's primitivist regime for being unable to either work on or make the journey to collectivized farms.[3]

Ableism can be understood as use of language that may be disparaging to people with disabilities, even if used to refer to a seemingly unrelated topic.[4] Among the more offensive examples is the use of the word 'retarded' as a descriptor of a person or a person's actions, and labeling political ideologies and opinions one disagrees with as "mental disorders". The strongest examples of ableist language include slurs such as "retard," "cripple," "spaz," and "midget." Some people define ableist language to be more broad, including words like "crazy," "lame," and "dumb." They argue that these words can be hurtful, as forexample, saying "anti-vaxxers are crazy" might be insulting to people with mental illnesses, who may not appreciate being compared to anti-vaxxer extremists. Other people argue that milder ableist language is not a big deal, and that it's unhelpful to act like people with disabilities have incredibly thin skins.[5]

People on social media sometimes enjoy trying to armchair diagnose people they don't like. One example is the #DiagnoseTrump campaign, in which people tried to armchair diagnose Donald Trump with several mental and physical illnesses, including Alzheimer's Disease, much to the horror and dismay of people with actual mental and physical illnesses who felt very insulted by the comparison.[6][7] This rarely does much to actually harm the person's reputation and hold them to account, and mostly just throws people with disabilities under the bus for short-term gain.

Treating persons with apparent disabilities as inherently deficient or incapable, even if well meaning, further affects people with disabilities even beyond their actual disability. Speaking to and treating a disabled person as if they were a helpless child disempowers and insults the person with a disability, and severely damages their quality of life, particularly as it isolates and marginalizes them from many social activities.

According to the social model of disability, the extent of disability is exaggerated or even fully created by the physical and social environment surrounding people,[8] rather than by the consequences of any actual impairment. Elevators, for example, that don't accommodate people with vision impairments are seen to be a barrier to full function. In this theory, a failure to create a physical environment suitable for all to use is a form of ableism, one that is either legally sanctioned or not addressed through straightforward legislation. As an egregious example, the United States of America is one of the few nations in the world that allows employers to pay disabled people less than the federal minimum wage, or nothing at all, a situation similar to modern-day slavery.[9][10]

Ableism remains a huge problem at the societal level, despite several attempts to address it by law.

The existence of disabled people has spawned numerous fraudulent charities and hate groups dedicated to preventing or profiting off of their existence. One high-profile example is Autism Speaks, an ableist hate group that demonizes autistic people while using parents of autistic children as their mascots, and often justifies the outright murder of autistic children in order to "relieve the mother's burden". Blaming autistic children for all sorts of social ills from divorces, family violence, and financial ruin, the so-called "charity" isn't above telling many lies that ruin the lives of millions of autistic people.

The widespread abortion of developing babies who are likely to have disabilities sends a hateful message to people who actually live with those disabilities. One report has revealed that almost 100% of Icelandic families abort babies that are shown as likely to have Down syndrome and Autism by prenatal testing and assessments, although some families choose to forego genetic testing.[12]Similar ableist arguments apply to euthanasia. While some disabled people may consider it a matter of equality to have the right to die, many are concerned that it would drive disabled people towards coerced euthanasia and physician-assisted murder in preference to more important needs like the provision of adequate and free healthcare when many disabled people are unable to access even basic healthcare services.[13] Sterilization of disabled people has not died out, either. While some disabled people make the choice to be sterilized just like non-disabled people can, there are many cases of parents and caregivers trying to make this decision for them. A high-profile example of public ableism includes the book To Siri With Love, written by Judith Newman, in which she revealed that she openly mocked and denigrated her autistic son, stating on one occasion that she intended to forcibly sterilize him on his 18th birthday, and then falsely claimed that autistic people can never be good parents.[14][15] In addition, several US states have laws that explicitly allow people with disabilities to be forcibly sterilized without their consent.[16]

Due to the physical and social impairments associated with disabilities, children and adults with disabilities are at a substantially higher risk of being abused and neglected, especially by their parents and caregivers.[17][18][19] Abusive people often see disabled people as "subhuman" and easy targets for exploitation, thus providing ample incentives for them to assault, torture, and outright murder disabled people. In addition, abusive parents often mistreat and reject their children due to perceived "moral defects" and "disobedience" caused by the disability, particularly when the child is autistic, leading to a vicious cycle of child abuse and cruel punishments. As a particularly egregious example of public ableism, some abusive parents outright publish books where they publicly reveal and glorify the abuse of their disabled children. For example, the ableist book Autism Uncensored features the mother screaming at, bullying, and using physical violence against her young autistic son, to the point that he shows signs of severe PTSD and suicidal behaviour after sustained torment.[20][21]

Abuse in therapy and education[edit]

Many disability-related therapies have received harsh criticism for being unnecessarily cruel, abusive, and even deadly. In particular, many autism-related therapies cause physical and emotional harm to autistic people, such as forcibly indoctrinating them to obey any order they are given without any dissent, injecting them with questionable and dangerous chemicals, and forcing them to drink toxic bleach drops, possibly killing them in the process.[23][24][25][26][27] In an extreme case of institutionalized ableism, in the United States of America, it is perfectly legal for ableist individuals to use electric shocks and restraints to punish children and adults for "misbehaving", using dangerously high voltage that regularly exceeds even that of the strongest police taser, and this abusive practice routinely occurs at the Judge Rotenberg Educational Center, which is being run as a concentration camp for disabled and autistic children. Despite numerous mass protests from disability activists and the Massachusetts State Government, the center remains open, although the Food and Drugs Administration has finally outlawed the use of electric shocks as aversives in medicine as of 2020.

Special education is not always a safe place for disabled children either, as they are regularly subjected to forced physical restraints, such as being forcibly pinned to the floor and tied to beds and chairs, and seclusion, such as being locked in a dark closet and room for an indefinite length of time, a practice that leads to severe physical trauma such as cuts, bruises, bone fractures and brain injuries and mental trauma such as PTSD for the children affected.[28][29][30][31] In particularly egregious cases, the police are called not to stop the abuse and arrest the perpetrator, but to arrest the children for "not obeying" or "not staying calm" when faced with horrific abusers.[32] Disabled children depend on the adults around them to treat them well, and they often fall victim to abusive teachers in special education.

Whenever a disabled person is murdered, especially by one of their caregivers or loved ones, the media often sympathize with the murderer, frequently calling the murder a "mercy killing" and a "final act of love."[33][34] News stories about such murder attempts often focus on the experience and viewpoints of the attempted murderers, such as when Kelli Stapleton was able to freely broadcast her story on Dr. Phil after trying to murder her autistic daughter Issy, while completely ignoring the wellbeing, experiences and testimonies of the children themselves.[35] Media coverage that blames people with disabilities for being a murder victim shockingly has negative effects on the entire disabled community, often leading to a surge in violence and murders of disabled people, especially children.[36][37][38] Unsurprisingly, it's not uncommon for anti-vaxxers, who act like having a dead child is preferable to having an autistic child, to express sympathy and support for murderers of autistic children. In fact, several ableist murderers have expressed anti-vaccination beliefs, and have openly declared that a dead child is "far more preferable to having an autist".[39][40]