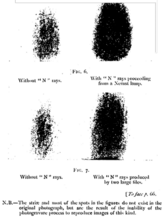 Images "N-Rays" from a 1940 scientific publication

N-rays are an early classic example of pathological science, the "science of things that aren't so". The N-ray was a hypothesised form of ionizing radiation described by French physicist Prosper-René Blondlot

in 1903, and initially confirmed by others, but subsequently found to be illusory, to the ruin of Blondlot's previously stellar reputation.

The interest for the modern scholar lies in the fact that people did successfully duplicate the experiments despite the fact that N-rays provably do not exist: it is a cautionary tale of confirmation bias.

Blondlot was one of eight corresponding members of the French Academy of Science. He was conducting experiments on X-rays

at his lab at the University of Nancy when he thought he saw changes in the brightness of an electric spark in a spark gap placed in an X-ray beam. He photographed the sparks, and later attributed the changes in brightness to a novel form of radiation, which he dubbed N-rays (N for the University of Nancy, where he worked). (X-rays were a relatively new discovery at that time, being first described in 1895.)

Blondlot, Augustin Charpentier, Arsène d'Arsonval and over 100 scientists published a total of around 300 articles discussing the phenomenon, and there was even a dispute over priority. Others, notably Lord Kelvin, William Crookes, Otto Lummer, and Heinrich Rubens failed to do so. American physicist Robert W. Wood, known as a debunker of nonsense, was prevailed upon to visit Blondlot's laboratory, where he secretly removed an essential prism from the experimental apparatus. The experimental operators still insisted that they saw the N-rays. He also replaced a large file claimed to be an emitter with a piece of wood, with similar results. His report was published in Nature and N-rays were exposed as purely subjective, with the scientists involved having recorded data that matched their expectations. By 1905, no one outside of Nancy believed in N-rays, but Blondlot himself is reported to have still been convinced of their existence. Martin Gardner attributed a subsequent decline in mental health and eventual death of Blondlot to the resulting scandal. This may or may not be true, but it is certainly the case that Blondlot's reputation was ruined.